BIM models are mostly used by foremen on construction sites. But what if they could be made available for workers at the press of a button? This question was what the Finnish government-funded KIRA pilot project set out to answer. As a by-product, the project also produced augmented reality (AR) solutions for construction sites.

The research project was called ”Digitalization of a construction project based on role and location information” (RoPa). It was conducted by construction company Fira and engineering consultancy Sweco.

Originally, the goal was to create a paper-free construction site, in which all the information needed on a construction site could be transferred digitally to the workers. This would also help to remove the clutter of notes and papers on the walls.

“A construction site can’t be managed without information, so if there is no access to information where it is really needed, it presents a difficult situation for professionals. There have been attempts to circumvent this problem by looking for a workforce from abroad that is cheaper and less educated instead of enabling professionals to work efficiently,” development director Otto Alhava from Fira states.

The location of the pilot project was a Fira pipe renovation site, where Sweco modeled the bathroom and delivered to workers the BIMs necessary for them to do their work effectively. In addition, an application was ordered from VTT that allowed visualization of the BIM in location through the use of augmented reality (AR).

“Using AR, the user doesn’t have to compare the 3D model and the physical room because they are brought together on the mobile screen. It facilitates combining the physical and virtual space,” VTT principal scientist Charles Woodward says.

VTT has been developing different AR solutions for a long time. According to Woodward, a central challenge in AR is to make the digital elements appear exactly where they need to in the real world. Marker technology developed by VTT was used for this.

A new addition to the technology was to combine the marker technology by VTT with Google ARCore technology, which allowed for the BIM 3D elements—such as bathroom furniture and fittings—to stay in their designated locations even when the marker was not visible.

“Together with the AR solutions by VTT and ARCore, we created a system that keeps the BIM elements in the right place to within a few centimeters. This is quite sufficient for visual observations. For example, a pipe fitter can make sure he doesn’t install the pipes before the electricity is installed,” Woodward describes.

From the user perspective, the application is easy to use. All they need to do is to start the application and point it toward the marker on the wall, and then all the 3D elements will appear in their designated locations.

Earlier, BIMs have been mostly used by foremen but now the workers were given their individual 3D views with information related to their specific job, such as drilling or wiring.

“Going forward, we intend to develop the system further. Electricians and pipe fitters both found our application promising.” 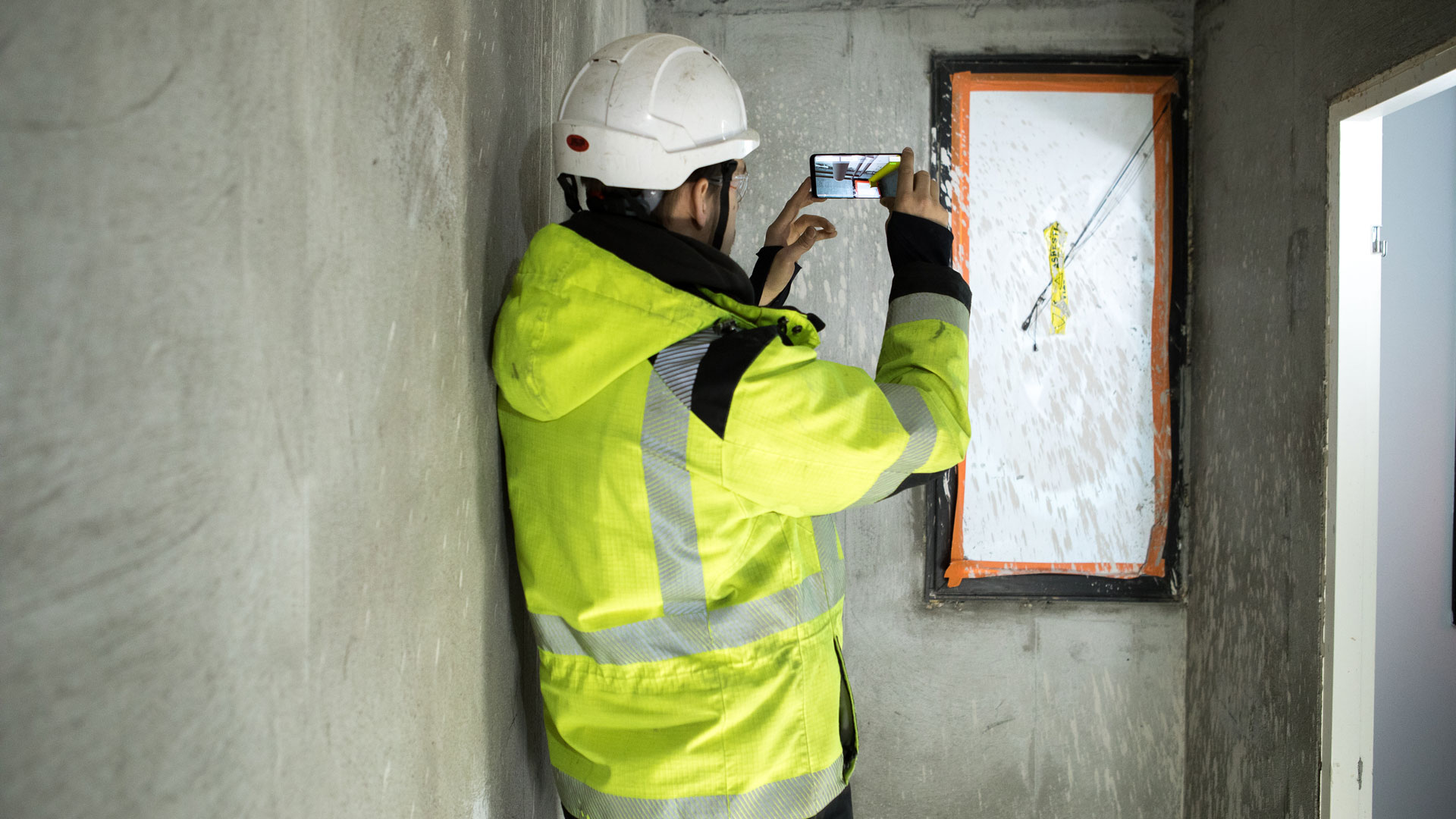 Otto Alhava from Fira also sees a lot of opportunities in AR given that BIM information content can be brought up to date. Though he finds BIM to generally be a step in the right direction—as it brings together all the parties involved—he also emphasizes that it is not the all-encompassing vault of knowledge it is often thought to be.

“BIM shouldn’t be made into a monolith if we want it to be applicable on construction sites. It is important to deliver only the necessary information relevant to the receiving worker’s job in an easy-to-use operating system. There is also room for improvement in the site information networks and maintenance of the BIMs.”

Alhava thinks that AR is a useful tool for checking installations or planning work. For example, the application can be used for finding out if pipes or equipment have been installed in the correct place.

On the other hand, the feedback for the pilot project asks for better measuring accuracy and more specific measuring information directly from the screen. The experiment also showed how challenging it is to execute a practical BIM on a small mobile screen.

“At this stage, the BIM itself doesn’t yet contain all the measurements that need to be shown to the user. Any necessary furniture measurements were thus added as separate images to the AR view, and the user could then enlarge those images at will,” senior scientist Mika Hakkarainen from VTT says.

“AR solutions are developing at a tremendous speed and we can expect several improvements in the coming months,” Alhava adds.

Open data platform as a vision

According to Alhava, the original goal of allowing efficient information transfer in real-time to the construction site has been crystallized over the course of the project.

“The greatest benefit of the KIRA digital project has been understanding how important it is to integrate all of our BIMs into an open data platform, so that the information is quickly available to everyone in a digital format,” Alhava says.

“We want to know what installations, for example, the electrician has made in a certain time frame. Respectively, the workers need to receive the information they need for the installation they must perform on the site. Also, users should be able to add feedback to the BIM on the go, so we need applications that enable a two-way information transfer.”

Modern information technology will be able to help workers in many tasks in the future.

“For example, AI can be used to find measurement errors or to give warnings about changes in the local conditions. We are currently looking into using a helmet camera to transfer information to the cloud daily, and utilizing sensor technology for managing information about the site conditions. We are also promoting digital information transfer to the construction workers and foremen through a SiteDrive application developed by Fira.”

A marker is matrix-shaped intelligent code that can be used by a worker to download BIM information of, for example, a bathroom to their mobile device. Such a marker also helps to bring together the 3D world and the real world (e.g., the bathroom).

Learn more about this project at World Summit on Digital Built Environment WDBE 2018, an event that will showcase a unique portfolio of ideas, projects, and businesses from the digital forefront of design, construction, property and real estate. The event takes place in Helsinki, Finland, on September 11-12, 2018.