Here’s a selection of recent articles on robots and drones coming to the construction site.

We Try a New Exoskeleton for Construction Workers

Watch this on The Scene

“Ekso started out trying to build Iron Man suits for the military, then spread into the world of physical therapy, with powered walking suits that help people learn to walk again after strokes or accidents. Over 4,000 people have used those. Now Ekso is trying to break into a new market: construction. The Ekso Works Industrial Exoskeleton is an unpowered frame that lets a person heft heavy powertools as if they weighed nothing at all.”

“On Monday, a Pennsylvania company demonstrated a new driverless crash truck that it hopes will improve safety at work zones around the country. Two of the vehicles will make their debut at highway construction sites in Florida by the end of the year under a state Department of Transportation pilot program.”

“Researchers and established manufacturers are working to develop autonomous deconstruction robots that are able to scan, plan and sustainably erase a building without significant human intervention.”

“The Semi-Automated Masonry (SAM) system from Construction Robotics is a bricklaying robot designed to work alongside a mason. As SAM lifts and places the bricks, the mason focuses on site setup, tooling joints and finishing/quality control. SAM can lay roughly 230 bricks an hour and can handle brick sizes from modular to utility.”

Read the story: Inside Unmanned Systems 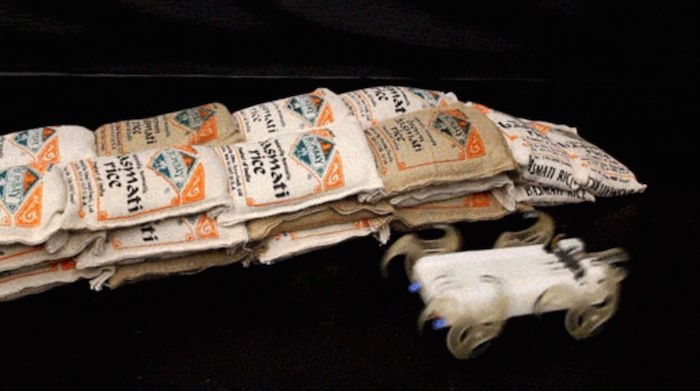 “Researchers at Harvard University and SUNY at Buffalo are designing robots to function outside of ideal, predictable environments such as warehouses or factories and instead work in places where there may be unexpected obstructions, and where predictive algorithms can’t be used to plan several thousand steps ahead. The goal for such “builder bots,” which are designed to handle inconsistent and malleable building materials, is to be deployed as disaster relief agents.”

Aerosense drones take to the skies

“Potential use scenarios could include getting a bird’s eye view of possible build sites and subsequent remote checking on construction progress, keeping track of migrating wildlife in hard to reach areas, and checking mountainous areas for storm damage.”

“Instead of speculating on how unmanned aerial vehicles (UAVs) — or drones — will transform the economy, California’s DroneBase is enlisting construction contractors as early adopters.”

“DroneBase was officially launched in 2014 as a platform to unite regional drone operators under a single order system and to provide clients in the construction, real estate and mining sectors with service packages at standard prices. An order of high-resolution images and video at a single location is priced from US$399. A high-resolution geo-referenced survey and mapping package for fewer than 25 acres starts at US$499.”