Robotics, 3D printing, and digital fabrication—these evolving technologies are changing how we design and construct. Looking into the future can surprisingly cause us to rediscover history, as I learned when discussing parametric design with Shajay Bhooshan.

During the AEC Hackathon Munich in April 2017, I became acquainted with Shajay Bhooshan, associate at Zaha Hadid Architects. Shajay showed me designs that were intriguingly reminiscent of natural forms but completely modern in expression. He explained how these lightweight structures had been digitally designed and constructed with minimal use of material. One of the examples he shared was a large shell structure that consisted of aluminium elements that could be assembled and dismantled easily.

A week after the meeting, I had a chance to talk with Shajay again and learn more about his company’s approach to design.

Experimentation in the DNA

“Zaha Hadid, as a person and a company, has always been keen to support young designers and architectural experimentation. Our firm is a collaborative experiment that never stops,” says Shajay.

“After I joined the company ten years ago, I cofounded our computation and design team, CoDe. Since then, our team has grown one person a year,” Shajay continues. “Our intention has been to put into practice our knowledge in programming, geometry, and mathematics. We want to physically realize a lot of research that has been done over the years.”

Drawing inspiration from the past

While creating something completely new with computational design, CoDe has made interesting discoveries in the history of construction.

Many innovative designers have used the type of geometries and principles that CoDe is now exploring. Works by architects like Antonio Gaudi, Stephen Sauvestre, Russian Constructivists, the Eames, Frank Lloyd Wright, Frei Otto, and the builders of Gothic cathedrals are very inspirational to them. Shajay is enthusiastic about this continuum: “We want to turn historic knowledge into contemporary knowledge.

Parametric design as a solution to complex, changing needs

Shajay’s keynote at the AEC Hackathon was titled Parametric Design Thinking. In parametric design, a few critical parameters yield a large amount of information that can be turned into constructible shapes. The process involves converting data into relevant architectural designs that can be built by, for example, robots. “Parametric design has grown to incorporate the idea of digital construction,” Shajay summarizes.

Shajay sees that parametric design and construction are not just a matter of architectural forms: “We believe that modern, intricate life requires more complex design. Our environments need to adapt to fast-paced change, and parametric design makes it possible. We want the built environment to mirror the natural environment.” 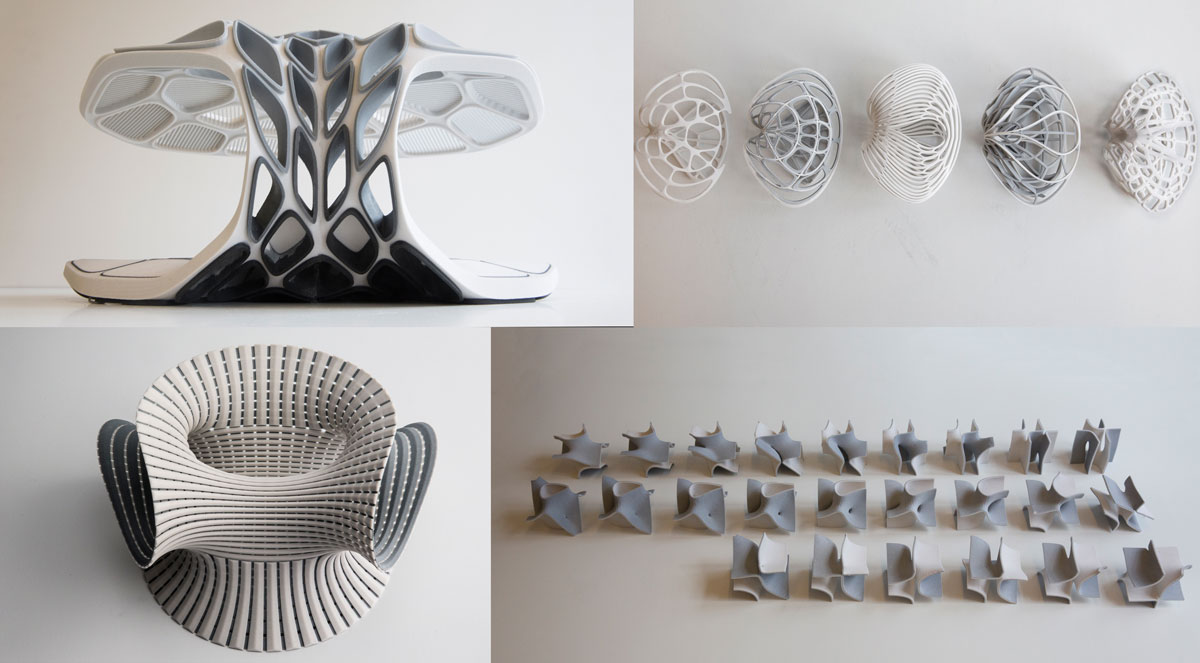 I also asked Shajay about the digital tools that they use for design. “I believe that we are proficient in using digital design tools, and we have some quite unique tools, too. However, we have no company policy on the kind of software we use. In fact, we are agnostic and very flexible as to tools. We use whatever set of tools that a project requires.”

As examples, he mentioned Autodesk Revit, several types of graphics software, and gaming engines. Their thinking extends to the kind of professionals they work with; e.g., computer artists and musicians.

Design must be collective and multidisciplinary

“Architecture does not exist in a bubble. Robotics, 3D printing, AI, big data, and so on will have an impact on the industry. Design cannot be simply a matter of intuition when you’re solving complex problems,” Shajay reminds.

Zaha Hadid Architects believes in collective, multidisciplinary problem-solving. From their paragons, they’ve also inherited the spirit of “total design,” in which any element of the environment can become part of the overall design intent.

The designs of Zaha Hadid Architects are innovative and every project unique, although recognizable as their work. However, Shajay says that they are not looking down on modular and prefabricated construction. In fact, parametric design can offer infinite alternatives at the same cost as traditional, standardized production.

It does not make any difference to a robot if it makes one or one hundred copies of the same object—parametric design has finally made mass-customized construction feasible.

When builders use robots, they often try to make the result look as if it were built traditionally. I ask Shajay if parametric design is going to change the way architecture looks and feels. “The situation reminds me of the early days of Photoshop, the graphic design tool. The first versions of Photoshop tried to imitate traditional methods and tools, like brushes and smudging. Today, you can create graphics with it that you could not possibly do manually. The same applies to parametric design.”

It seems that parametric design, drawing inspiration from history, is going to flourish at Zaha Hadid Architects. “Over the ten years of CoDe, we’ve created the foundation. Now, we can put our knowledge into practice,” Shajay concludes.

Shajay is an Associate at Zaha Hadid Architects where he heads the research activities of the Computation and Design (CoDe) group. He also works as a studio master at the AA DRL Master’s program in London. He pursues his research in structure and fabrication aware architectural geometry as a PhD Candidate at the Block Research Group, ETH Zurich. Previously, he has worked at Populous, London and completed his M.Phil from the university of Bath and M. Arch from the AA School of Architecture, London