Small contractors, consultants, and design professionals have a love–hate relationship with responding to RFPs. Duuers, a Finnish startup, wants to turn this struggle into an inspiring experience. 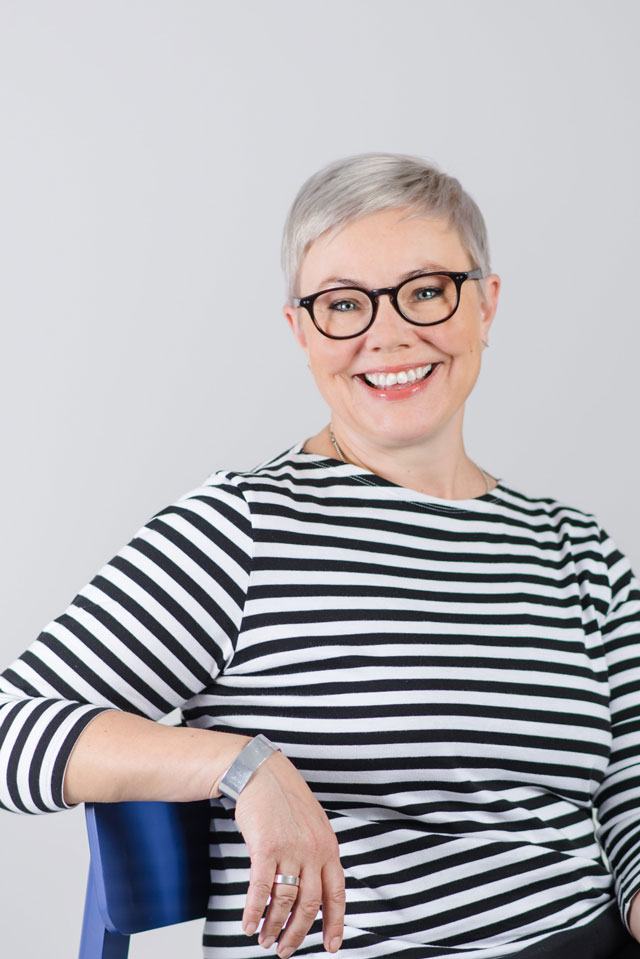 “We followed a day in the life of a hand-picked group of entrepreneurs,” says Paula Viinamäki, co-founder of Duuers. “We were flies on the wall, observing how small business owners wrestle with their daily tasks. Proposal-writing seemed to be an especially painful and time-consuming, yet vital, job.”

Defining the Scope through Experiments

After discovering this poorly supported but essential job that had to be done, Viinamäki and Jussi Paanajärvi, the other co-founder of Duuers, realized that they might be onto something. Consequently, they decided to start working on a prototype app for proposal-writing in the spring of 2017.

By October, they had a basic product available for the first 40+ enthusiastic pilot customers.

At the same time, Duuers applied to take part in a KIRA-digi experimentation project. They got government funding to test how buyers could use the same platform to issue requests for proposals. After some thought, the founders decided to focus on the proposal-writing process in small companies.

“Experiments are a great way to learn. Not only what to do, but also what not to do,” says Viinamäki.“ The KIRA-digi project showed us a pathway for scaling up our solution if we decide to do so in the future.”

Viinamäki has a strong background in product development. At Nokia, and later Microsoft, she was a director of product management and the user experience, and led the renowned Forward Labs. Among others, she was in charge of the user experience for Nokia’s legendary E71 smartphone. Paanajärvi worked at the same companies as a product maker and is an experienced service designer.

Duuers uses 5-day sprints to develop their software. They made their first prototype during such a sprint and used the same methodology in the KIRA-digi project.

They interviewed a group of customers, figured out the problem, innovated the solution, and made a prototype. They then gave the app to customers to try out and collected feedback for further development. Surprisingly, the current app is not very different from the first prototypes.

“We wanted to understand what the time-wasting jobs were for small entrepreneurs and how to best get rid of them or speed them up,” says Viinamäki. “Typically, vendors offer solutions that are made for the marketing and sales processes of large corporations. Our target customers are non-tech-savvy entrepreneurs.” 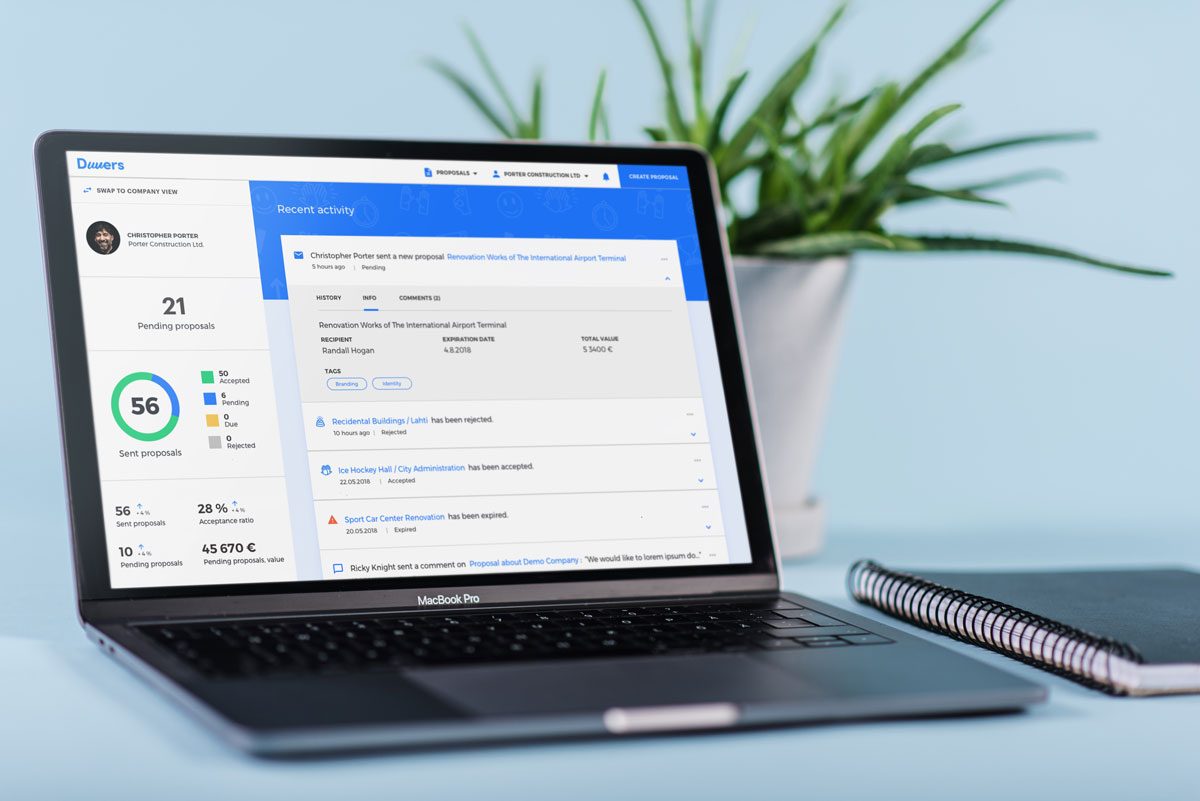 Proposal-writing is not very rewarding. Entrepreneurs know that at best one in ten will lead to a sale, yet they still have to do them, but each proposal takes a lot of time to make with the office software they use.

Viinamäki says that customers have already got tangible business benefits from their software. She cites some of their customer feedback: “I make proposals now 50% faster”, “This took a stone off my chest,” and “I was able to hire a new employee.”

So far, Duuers has not marketed their solution extensively. They have concentrated on serving their existing customers, helping them take the app into use, and collecting feedback. Initially, Duuers had a long list of features but cut them back to the bare minimum. The customers tell them what to prioritize in the app development.

The Duuers app is delivered as a mobile-friendly Software-as-a-Service. After registering online, you can start using it right away. You can personalize the look and feel of proposals with your own company logo and colors.

The app allows the user to build a library of proposal elements, for example, a price list of services, project references, images, and testimonials. Templates are included that are useful for different types of projects. In fact, the app encourages service firms to start building productized services.

After composing the proposal, the entrepreneur uses the app to email the client a link to it. The client can comment on the proposal and chat with the contractor during the process, and can also accept the offer with the click of a button.

The app keeps track of all the proposals and their respective statuses, and collects statistics. 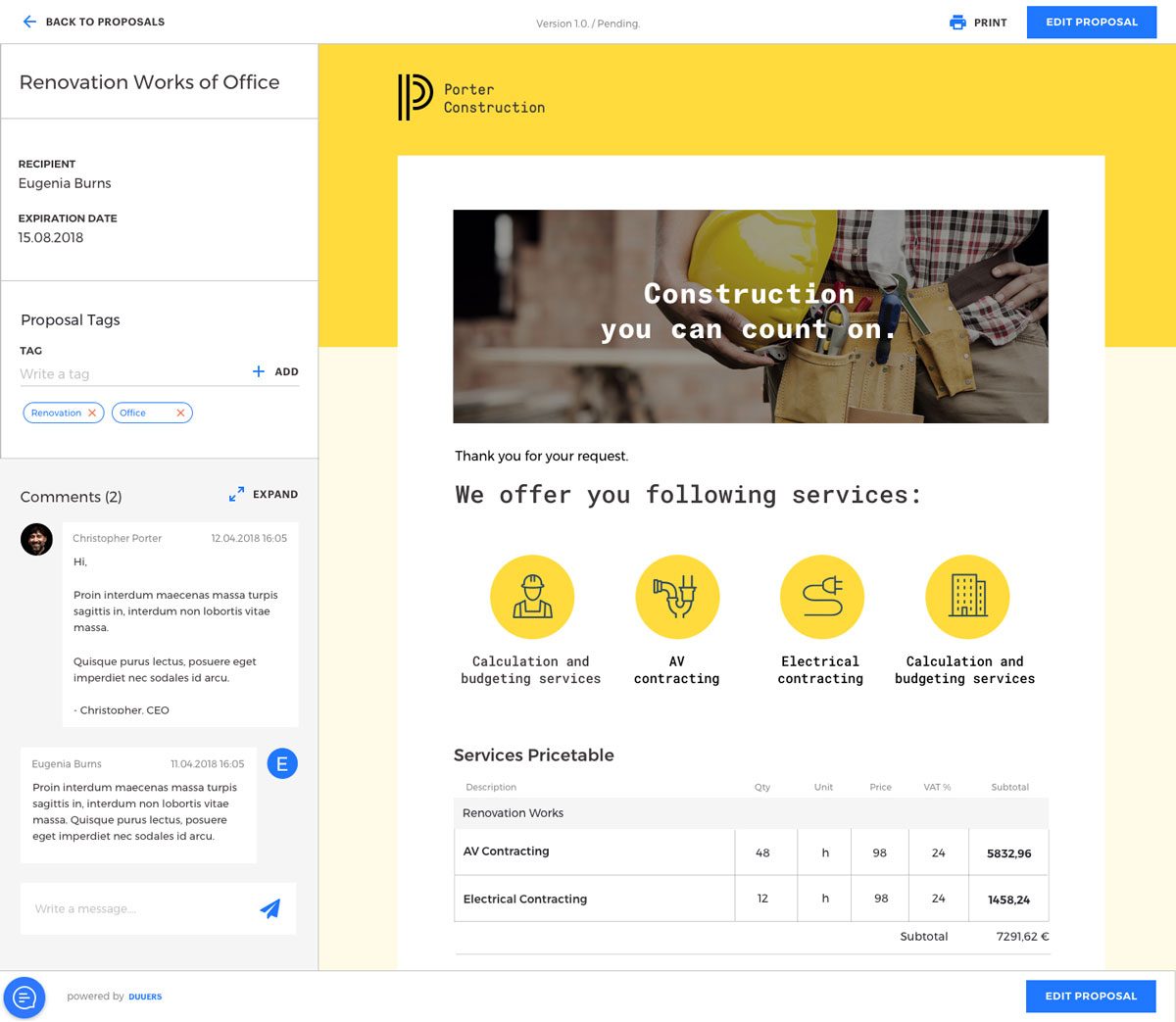 The market for Duuers is sizable: 97% of companies are small, and many of them write proposals. Most use Word and Excel for proposal-writing, and Viinamäki considers Office software as their main competitor.

The app is available online for anyone to use for free. Duuers has started by targeting the construction industry, but in practice, their app is universal.

The company plans to commercialize the solution in the autumn of 2018. The product is in English and localized in Finnish and Swedish.“Finland is a great market for piloting, but we have no restraints and plan to go international quite soon,” says Viinamäki. “You can meet us at WDBE 2018 in September, where we will have a demo on display.”