Finland’s capital is currently experiencing a construction boom. Old industrial citadels are turning into residential areas with new commercial centers. Consequently, Helsinki needs to build new infrastructure. To improve the efficiency and quality of infrastructure construction, the city has started using BIM, and is now learning how to get the most value from it.

Ville Alajoki, Team Leader in Helsinki’s Urban Development Division, is a keen proponent of BIM. “Infrastructure construction is still in its early stages when it comes to using BIM. For the most part, BIM implementation has not been systematic in our city yet. We tend to use it in our own structural design and often in building construction. However, in infrastructure project management, its active individuals who have set the pace,” Ville admits. He believes that the city’s strategy for 2017–2021 will spur the use of new technologies, including BIM. “Helsinki aims to be the city in the world that makes the best use of digitalization,” Mayor Jan Vapaavuori has declared.

A good start, but there’s room for improvement. 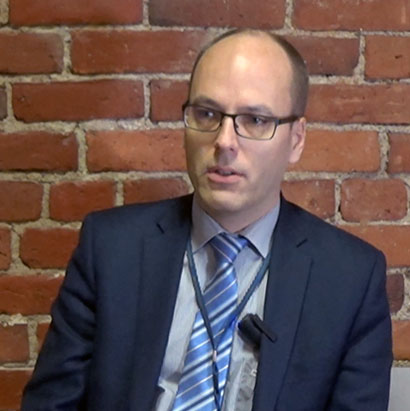 Helsinki is a big buyer of design and construction services, which means it can set certain quality requirements for each project, for example, the use of BIM. However, Ville Alajoki sees a lot of room for improvement, both on the city’s and on the suppliers’ side. “Firstly, the buyers of design services don’t typically have enough insight into how the contractor could benefit from the use of modeling,” Alajoki claims. Furthermore, many see BIM as an additional task, requiring a dedicated organization; whereas BIM, like any other tool or method, should be an intrinsic part of the process.

The third challenge is the paradigm shift that modeling requires. Even in some of the biggest firms, many designers still design and think in cross-sections. They use the model just to output the traditional section drawings, discarding the other possibilities that a model could offer. The same companies seem to think that BIM is just a software upgrade.

BIM has proved its value in city’s infrastructure construction. In an ideal world, the initial data of old cables and pipes under the street would exist in BIM format. As this is not typically the case, this information must be generated during the design phase.

Alajoki acknowledges that current standards don’t cover all the structures or material definitions, but they’re under constant development. For example, Helsinki, Espoo, and Vantaa are developing landscape design classifications under the auspices BuildingSMART Finland.

Alajoki sees clear and measurable benefits from using BIM for infrastructure. While modeling might require more work during design, the small investment creates substantial savings later in the process. After all, design costs can be under 10% of the total project spending. “The adage that well designed is half-done is true in modeling,” Alajoki exclaims. Accurate design data renders big risk premiums unnecessary. The use of BIM also reduces the amount of costly extra work that often arises during construction. Other direct savings include machine control that makes the surveyor redundant.

One of the notable aspects of the use of BIM is in prefabrication. Accurate production models make it possible to produce components, e.g., steel reinforcements, in factories. This can reduce errors and speed up the construction, thus reducing disturbance to the community and problems with slowing down the traffic around the construction site.

Helsinki has traditionally maintained registers of its infrastructure assets. “If we define BIM as the transfer of categorized data in machine-readable form, then the registers belong to the BIM domain,” Alajoki explains. Registers are, in a sense, a filtered set of information derived from BIMs. As-built models already contain much of the information needed for city’s asset management and maintenance.

A bridge built with BIM

Isoisänsilta (the ‘Grandfather’s Bridge’), a cycle and pedestrian bridge, is Helsinki’s flagship infrastructure BIM project. For its construction, Helsinki required the use of BIM by all project parties, including the contractor. “Our original goal was to use modeling and to not send any drawings to the contractor. We intended to hand over all the information as information models,” Ville Alajoki says. “Then, we encouraged the contractor to pull out as much value from the models as possible.” Except for providing a few type drawings, Helsinki achieved its goal.

BIM was a new tool for the contractor, but the learning curve was fast. The contractor alone was responsible for creating all the construction documents from the model. “The contractor, and especially the employees, could study the model on site. The model was a common language,” Alajoki recalls.

The city was prepared to face some drawbacks in the project, but these did not materialize. In fact, the project exceeded the expectations when it opened in June 2016.

This project was proof that the technology works and can be used in construction successfully. Helsinki now uses BIM in most bridge construction projects in the city.

Learn more about how BIM is used in infrastructure construction in the Nordics at InfraBIM Open Tampere.