Water in the wrong places in a building is a problem that can lead to health issues and expensive repairs. I interviewed Jarmo Tuppurainen about an experimental project that tests how cheap, passive RFID sensors can help with moisture monitoring.

I met Jarmo, the Technology Manager at Helsinki Metropolia University of Applied Sciences, at the leading event for housing markets in Helsinki (Asuntomarkkinat). He and his team had set up an impressive display of devices and structures in the KIRA-digi showroom.

Metropolia’s is one of the 107 experimental projects that have received funding from KIRA-digi. It is the Finnish government’s 16 million euro spearhead digitalization program. The program aims at an open and interoperable information management ecosystem for the built environment.

The university has sponsored several projects pertaining to healthy buildings. “Water damage is an unimaginably big problem at the level of the national economy here in Finland and elsewhere. It creates health problems that are really expensive to deal with,” Jarmo explains. “Until now, it has been very difficult and costly to locate the sources of the problems. You have to drill holes into structures or use unreliable surface metering.”

Metropolia has tested an alternative solution that uses passive RFID sensors placed inside walls, roofs, and floors. These measure moisture right in the critical spots, for example, under window openings. Since the sensors are passive, they don’t have a battery, and therefore their lifespan is very long. Another benefit is that the sensors are very cheap, a few euros each, and getting cheaper.

Jarmo says that the technology is not exactly a recent innovation: “The method we’re testing was originally developed by a Finnish company, Vigilan, 10 years ago, but it did not catch on back then. Lately, Swedish InviSense has introduced a similar solution. Already, over 75,000 of their sensors have been installed.” Metropolia uses RFID sensors from four manufacturers: Vigilan, InviSense, Smartrac, and Siltanet. Each of them functions slightly differently.

The sensors reside under the moisture insulation of a structure, which is why you need to install them during construction. So far, there’s no practical way to implement them in an already-built structure. However, if you’re doing retrofitting or renovating your bathroom, adding sensors is quite easy. They are like stickers you paste on a wall. 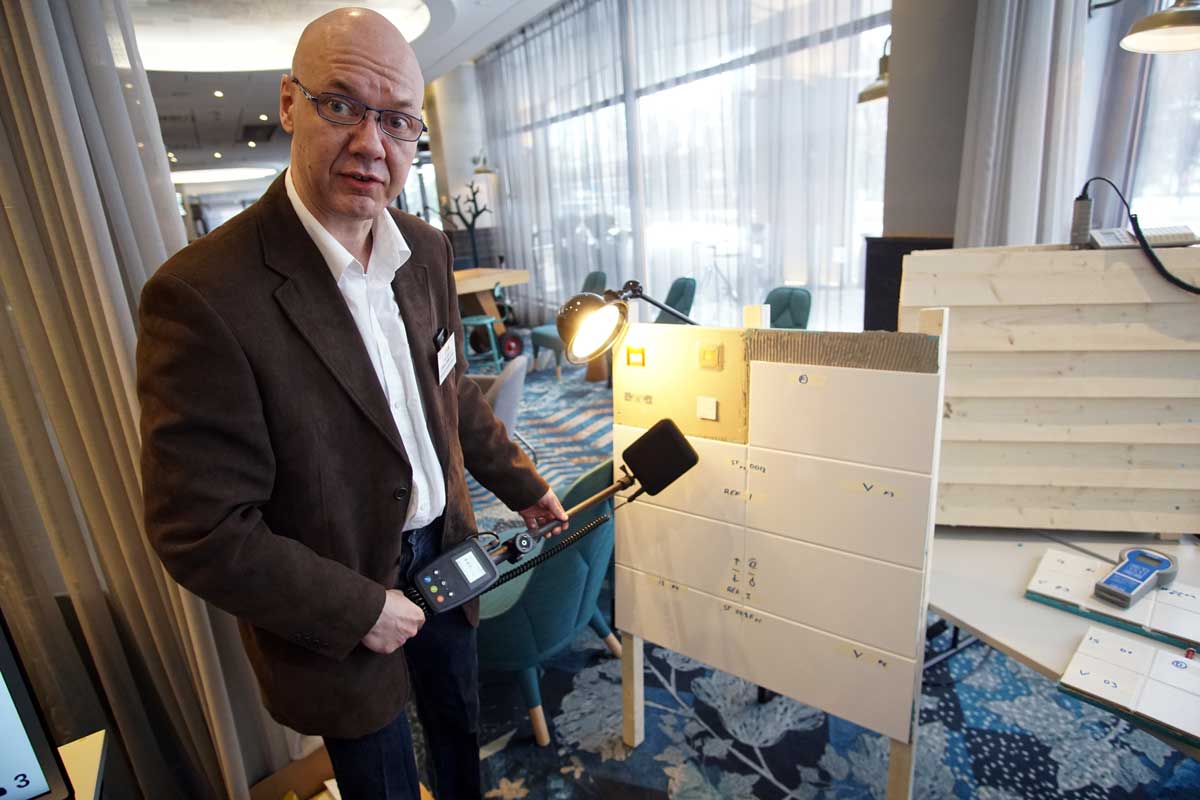 Some sensors allow you to read their data with a smartphone app, as Jarmo demonstrated. “In a single family house, you need around 15 sensors in bathrooms and 20 on outer walls. Smartphone-readable tags cost 15 euros each.” In a terraced or apartment house, it’s advisable to buy a handheld scanner that costs somewhere around 500 to 700 euros.

Metropolia had RFID tags, scanners, and drones on display. Jarmo explained that drones are handy for reading RFID data in hard-to-reach areas like high ceilings. Some drones can navigate indoors autonomously on construction sites, for example.

Jarmo thinks that the building client, the payer, has the greatest incentive to have moisture sensors installed. Contractors can benefit as well, as they can control how well subcontractors are doing their jobs. Insurance companies have a way to check where and when damage has occurred, and who’s possibly the responsible party.

Homebuyers and sellers can use the technology, too. If you’re selling or buying a house, it’s reassuring to know the real condition of bathrooms or roofs before a purchase. Especially in Finland, homebuyers are often prepared to go to court to get a reduction on the purchase price after they allegedly discover mold or moisture in their new home.

Metropolia’s first experimental passive RFID project focuses on technology and its feasibility. The university applied and got funding for a second project that studies how sensor data from different manufacturers could be harmonized and transferred into a building information model (BIM).

Connect with Jarmo Tuppurainen on LinkedIn