Entering the office of Naava feels like you’ve stepped into a forest. Naava promises to bring the nature inside and make you feel better.

“My passion and mission is to improve people’s health, happiness, and performance,” says Aki Soudunsaari, the Founding Partner and CEO of Naava. Aki is a former teacher and headmaster; a behavioral scientist in a startup. During his teaching career, he suffered from chemical hypersensitivity with annoying symptoms. The reason behind his predicament was poor indoor air quality. That led him to study the air-cleaning qualities of green walls with Niko Järvinen, an environmental scientist. After prototyping the concept successfully, Naava was born.

Aki says that starting a company from your own experience puts you in the customer’s shoes. You’re looking for a solution to a problem, not a market for your technology.

Healthier environments and ease of use

Aki thinks of Naava as a health technology startup, even though their product is used in built environments. Their technology purifies air, controls humidity, and creates a natural environment that has a positive effect on the psyche. When people feel better they perform better, and that is essential for the success of any company and organization. Aki has received thousands of testimonials from their customers, praising the almost life-changing effects of their product.

From the initial versions in 2012 onwards, ease of use was a guiding star for Naava. Any actions that users would have to perform could make the product less desirable. Adding water every two, four, or six weeks is the only maintenance that the green walls require. Naava takes care of the rest for a fixed monthly fee. The green wall uses typical indoor plants, but its air-purifying effects come from microbes on the roots. The wall has a fan to make the air flow through the roots and sensors that measure 14 different data points of the unit and send them to the cloud every five minutes. Naava’s uniqueness comes from a combination of patented biological units and AI powered cloud service that optimizes the quality of the air. 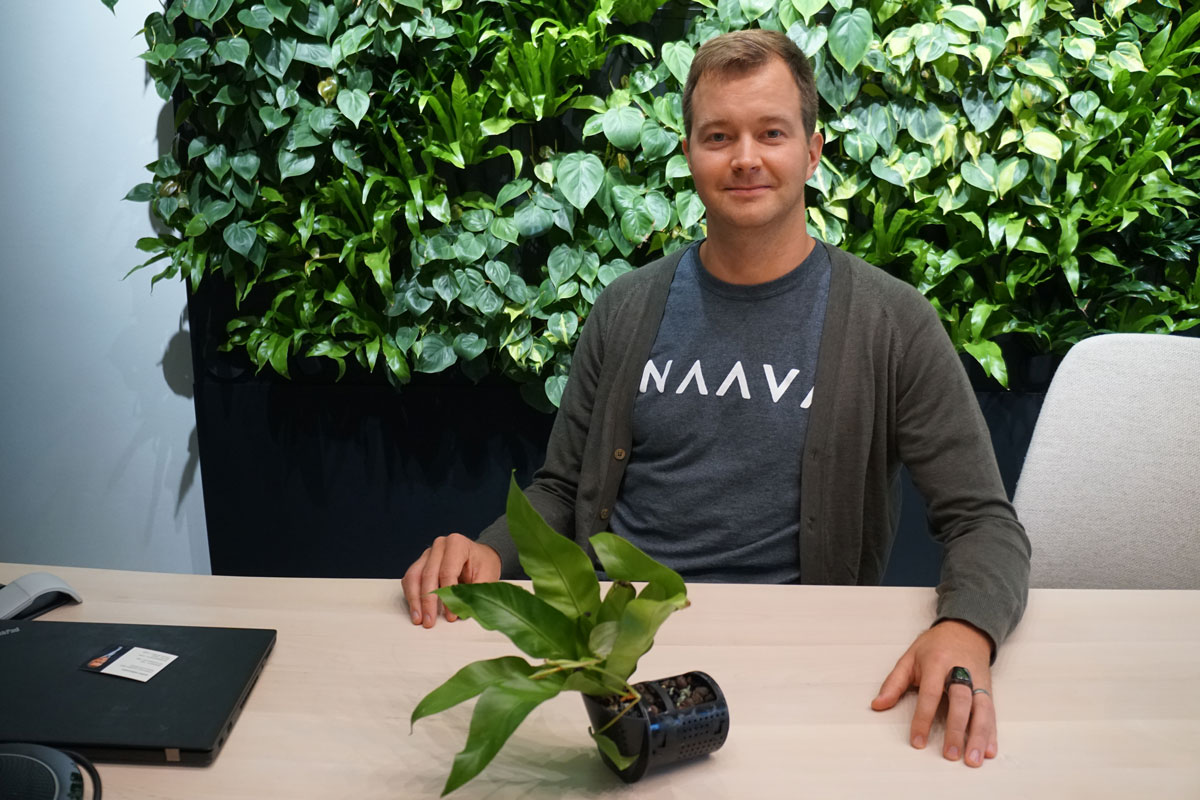 The path from the idea to a successful startup has had many hurdles, as Aki explains. For the first three years, the company was self-financed. “We had sold twenty green walls already before the product was ready. It was quite a leap-of-faith from the customers. We gave a money-back guarantee if the product would not work as expected.” Luckily, everything went well, and the first customers became co-developers of the product. Initially, the company was self-contained. They made their own software, assembled the electronic parts, did biological and chemical tests, and so on. Building the business in this manner resulted in a culture where both mental and physical work are appreciated.

After a couple of years of development, Naava’s team presented their product and ideas on several forums. The reception was not encouraging. They were told that neither the business model nor the technology were feasible since no one has done it before. “It was a typical response to a disruptive idea. In all fairness, we could not explain clearly why it worked, even we had witnessed its dramatic effects empirically. Later, we discovered that it used the same principles as biological water purification, composting, or our digestion – with microbes,” Aki describes. The claims of lacking scientific validation still pop up occasionally, but results speak for themselves.

In late 2013, Naava started preparing their first investment round to get resources for further developing their design and technology. Since then, funding has come from a wide spectrum of investors: VCs, corporate VCs, crowdfunding, and so on. Funding is an on-going struggle in a startup that’s committed to growth. However, growth is not simply a money issue. “In a startup, a person must grow mentally faster than the company. A company seldom grows by itself,” Aki points out. Naava’s business model is like that of KONE; they sell and maintain the product throughout its life cycle. It’s a challenging model to scale up and internationalize for a 64-person team that currently takes care of all aspects of their business.

“Our long-term vision is that in 2025 a billion people can breathe Nordic air,” Aki proclaims. “Reaching that vision is not possible with green walls alone. It can be done by using biological air purification that combines the imitation nature with technology. We’re currently developing the next technology that does not use plants, and have received funding for it.” In Naava’s technology vision, biological air filters have surpassed mechanical filters in the built environment by 2025. Poor indoor air quality is a $500 billion a year problem in Western countries alone. The future with six hundred megacities yearns for Naava’s smart and green solutions. Naava could certainly become the next Tesla, as Aki envisions.

This article by Aarni Heiskanen was first published in ReCoTech Review, November 30, 2017.