The first Nordic Smart Building Convention took place in Helsinki on June 14 and 15, 2017. It was an inspiring event with great keynotes, tech talks, and an exhibition of smart building products and services.

The event was organized by HUB13, a leading co-working space provider in Finland. I had met with the producer of the convention, Sjoerd Postema, when he was planning the event. He asked for my ideas on possible topics and presenters. Later, he invited me to host a workshop and a roundtable at the convention.

During the event, I scribbled down some notes, from which I present the highlights here.

From Automated to Cognitive Buildings 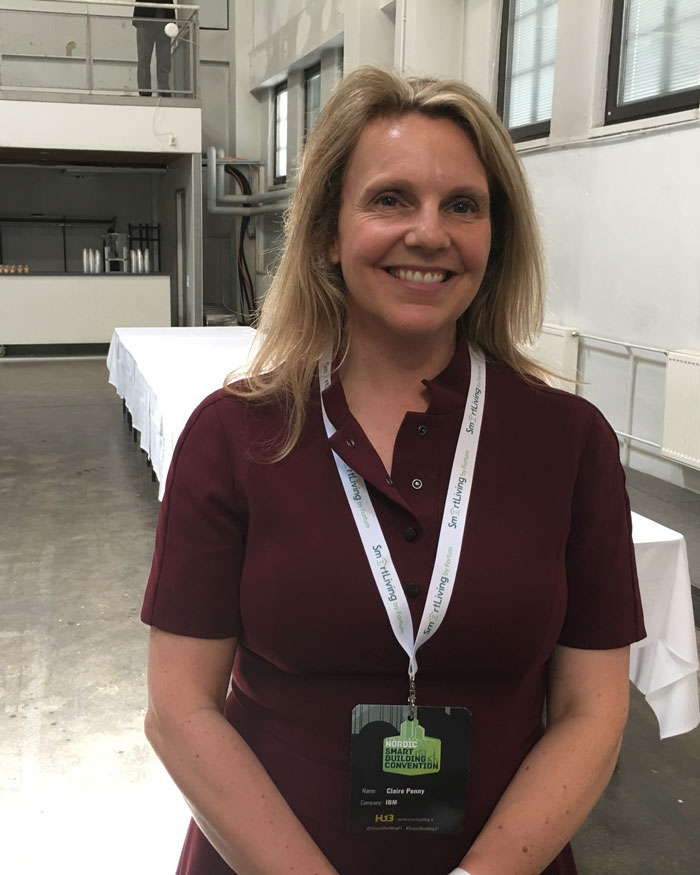 Dr Claire Penny, Watson IoT WW Solution Leader from IBM, talked about the Internet of Things (IoT) and how artificial intelligence can be used to make buildings smarter. From the 1980s to the turn of the century, buildings were automated. Then the smart building emerged, providing more data, of which only a small portion is ever analyzed and used to improve building and user performance. Claire claimed that 90 percent of the data provided by sensors is “dark data”.

The next phase in evolution will be cognitive buildings that understand what’s going on within them, right down to desk level. A cognitive building uses artificial intelligence to process and analyze sensor data. For example, it can carry out self-learning energy diagnostics and allow the use of natural language in communicating with the building.

Cognitive buildings have already proven their worth. Claire mentioned Tesco Ireland as an example. The company’s building sensors provide a staggering 678 terabytes of data in a year. Using a cognitive system, Tesco could reduce the cooling of its facilities by 20 percent, thus saving EUR 20 million annually.

Data from the construction phase is a “digital twin” of the physical building. Unfortunately, that data often goes unutilized. Dr Penny gave an example of facilities managers who would normally input asset data manually into a management system once a building is completed. Using data from the construction phase in a smart way, they could reduce what is typically a six-month effort into a half-day job. Ferrovial, an IBM customer, made a 3–7 percent saving in life cycle costs of new infrastructure by integrating data across construction phases at Heathrow Airport.

“We are now in a transformational phase”

MIT Media Lab professor Joe Paradiso had a cornucopia of cool projects around IoT and smart buildings. He started his presentation by claiming that the problem with today’s IoT is that it is unconnected. To become really useful, it must be connected. The Open Connectivity Foundation, among others, is paving the way to open IoT standards.

According to Joe, we are now in a transformational phase. Sensors and smart devices will make our experiences richer and enable extra sensory perception. He shared several examples from his lab’s projects that proved the point.

Joe showed a live 3D model from an MIT building created in the DoppelLab project. It used a game engine for visualization. We could explore, in real time, visual and audio data from the building’s sensors. There’s a video demonstrating the interface at http://doppellab.media.mit.edu.

Another MIT project built sensor networks in Tidmarsh wetland in Plymouth, Massachusetts. A former cranberry farm is now being returned to natural wetland. The sensor networks document ecological processes and allow people to experience the data at different spatial and temporal scales. Some of the data is even turned into electronic music. To learn more, go to https://tidmarsh.media.mit.edu.

“Lighting is broken,” Joe Paradiso claimed. The way we control lighting in buildings is technology-driven, not user-driven. The MIT Media Lab is experimenting with lighting that adapts to what an inhabitant or an office worker is doing or trying to achieve. An office worker can, for example, use a laptop in one instance, read documents in another, have visitors, want to relax, and so on.

The experimental lighting changes according to the needs of the worker. Using projected images or screens, it can transform the space into a relaxing forest or any other environment that pleases the worker. The cognitive building can learn from the user’s action and preferences. When several users are in the same space, a smart system can mediate the conflicting demands.

Wearables give you the first-person perspective to buildings. MIT has experimented with all sorts of wearables: devices that use wrist tracking, finger tracking, even fake fingernails.

Social Media as a Sensor

An interesting tidbit from the presentations of both Claire Penny and Joe Paradiso was the use of social media as a sensor. Around 70 percent of all data is unstructured. With artificial intelligence, that data can become useful.

Claire showed how Twitter data can tell which museum has the worst air conditioning (the Louvre) or which skyscraper has the best elevators (Burj Khalifa)! MIT’s DoppelLab visualizes real-time social media feeds created at the lab.

Using Data on the Construction Site

The CEO of NCC, Peter Wågström, talked about how a contractor can use smart technologies for better business. Peter mentioned  virtual design and construction (VDC), virtual and augmented reality, machine steering, 3D and 4D modeling, mobile apps, and drones.

He pointed out that we often think about digitalization in terms of creating something completely new. However, improving existing processes and practices can be equally important and can have a huge impact on a business. At NCC, a digital solution is considered if it: 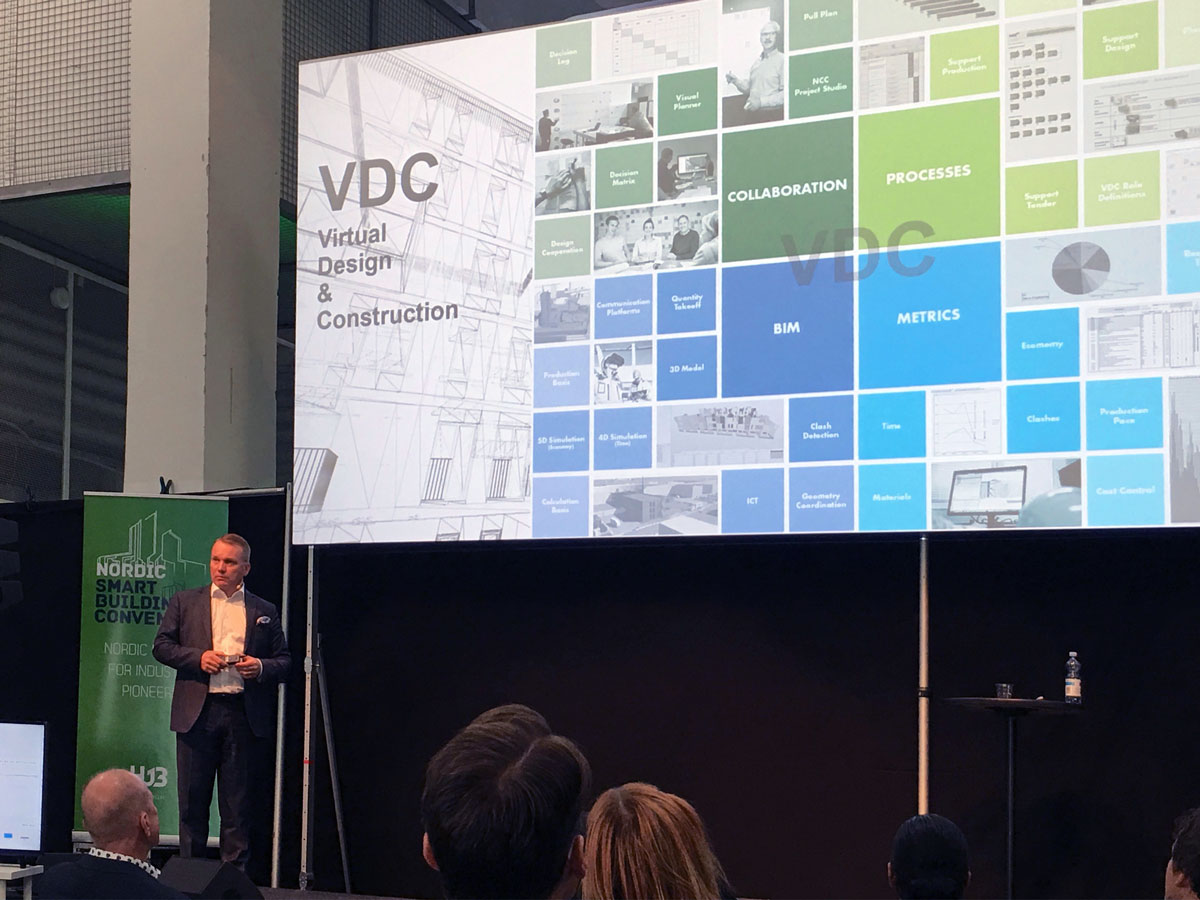 One example of NCC’s digitalization efforts is the implementation of Bluebeam, a solution that they use for digital construction document management. Peter Wågström also mentioned a service that allows mobile trading of land masses between jobsites and a sophisticated paving system that uses GPS and BIM.

An audience member asked Peter why the construction industry has been slow to digitalize. He answered that it’s mainly a question of risk management. We have learned how to manage risks in a conventional process. Digitalization brings in new processes and solutions that, at first, we know little about. Therefore, we cannot fully identify or manage the new risks.

There were many other exciting presentations at the event. My conclusion from all the talks was that business benefits and improved user experiences are driving the change to smarter buildings. A smart building creates value to its users and owners, and to society at large.

The construction industry should be vigilant in adopting smart solutions. Designers can obtain data from existing buildings to improve new ones. Contractors can use IoT, AI, and mobile technologies to improve productivity. The completed product should consist of both information and the physical building with networked systems. Events like the Nordic Smart Building Convention are a great way to learn, and to start the transformation.