The first-ever ReCoTech meetup, an official Slush side event, took place in Helsinki on November 30, 2016. This meetup was an opportunity for startups to partner with established real estate and construction companies and possibly get funding.

Driving to the ReCoTech venue took longer than expected. The roads were filled with cars and taxis headed for Slush, Europe’s leading startup event, which was taking place next door. Indeed, 17,500 people from over 120 countries attended Slush. Joining in were 2,300 startups, 1,100 venture capitalists, and 600 journalists.

Before the actual ReCoTech meetup, startups had booked short meetings called “Speed Meets”  with the attending companies. Based on what I saw on site and heard afterwards, the companies were happy and had all found potential partners during the day.

RAKLI, FiGBC, and Newsec organized the ReCoTech event. HESA-SAFA, a local sub-organization of the Finnish Association of Architects, hosted the afternoon program. In addition to the startup-company meetings, the agenda included several interesting and thought-provoking presentations.

Here are some short summaries of the morning presentations at ReCoTech.

Digital sharks will attack the real estate and construction industries. 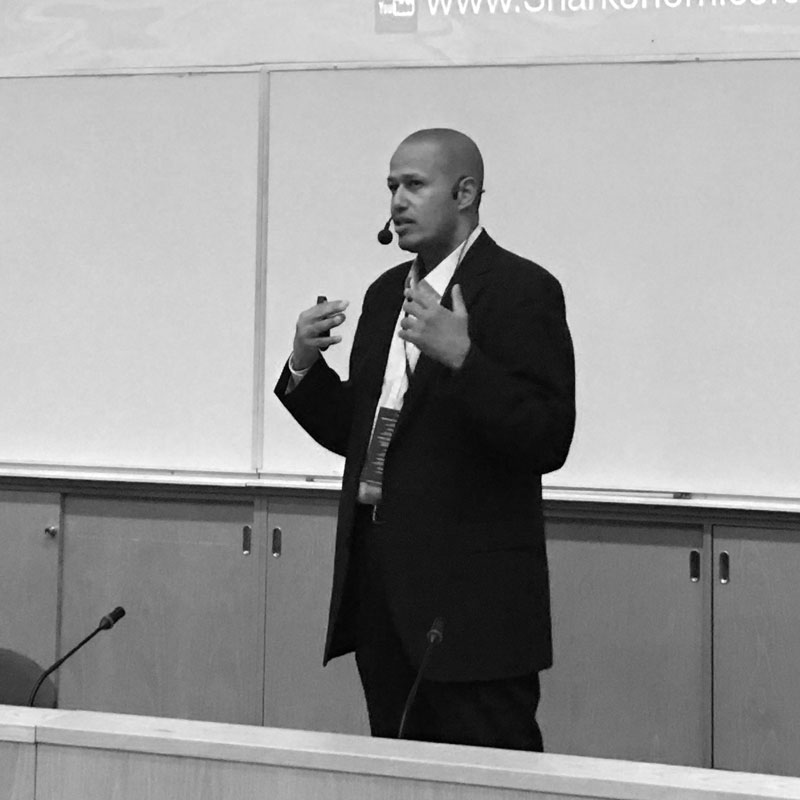 Stefan Engeseth, visiting professor, author of Sharkonomics, and a keen diver, gave a dire warning. He has studied sharks and drew parallels between those predators and companies in today’s business environment.

Surviving a shark attack is almost impossible. If you see a shark’s shadow and act accordingly, you might have a chance. Construction, like any other industry, will be attacked by sharks—in this case, sharks that come from outside the industry.

Stefan claims that the shadows of circling sharks are already visible. He’s done interviews with companies looking for opportunities to disrupt an eight-trillion-dollar construction industry that has not changed much in generations.

Sharks do “test bites” before a full-blown attack. Large IT corporations like IBM, Microsoft, and Google are testing the built-environment waters. Digital corporations see potential in the built environment and don’t want to leave money on the table. Construction could very well become subordinate to digital companies that manage information and serve people through the cloud. Stefan urged construction industry companies to take the threat seriously and act fast. “If you want to survive, you need to know what’s in the water before you jump into it.”

Investors and startups together 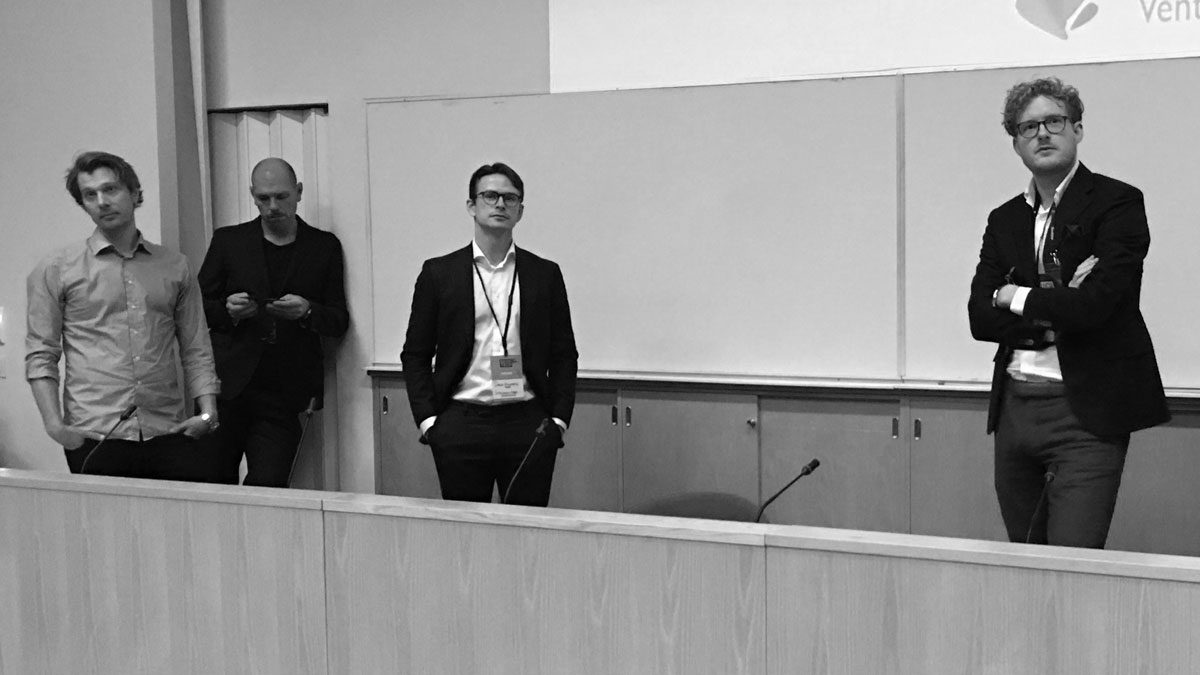 Daniel Wikström, head of Realtech Ventures at Stronghold Invest, talked about why his company wants to invest in ReCo startups. The company’s business model is to own, develop, and invest in the real estate services of tomorrow. It is focused on digitalization and the change that it is bringing to the industry.

In its portfolio, Stronghold wants to retain a healthy balance between innovative, agile tech startups and well-established real estate companies. As an example, Daniel invited two startups, Tessin and Workaround, to tell their stories.

Jonas Björkman, CEO and founder of Tessin, described how his firm has become the largest real estate crowdfunding platform in the Nordics. He also busted a few myths about working with big companies.

The incumbents make promises on synergies, but they hardly ever realize them. Many of the big companies only want to work with startups for PR purposes. “PR is not business,” Jonas reminded his listeners. Getting funding and advice from investors seems like a good idea at first, but they are not there to rescue you. You should think of capital as a tool. Advice can be valuable as well, but don’t listen to the incumbents too much. Anyway, isn’t it your goal to attack and defeat the old business models?

Andreas Broryd, CEO and co-founder of Workaround, spoke about the firm’s sharing-economy platform for vacant office spaces. The company started from this observation: there are great-looking offices all around, but they are empty. The way people work has changed, but the way spaces are supplied has remained the same.

Workaround matches those who are looking for offices for a short term with companies that have underused spaces. On its platform, you can lease anything from a desk in an office to a whole building. Workaround uses data to find a perfect match, and it manages contracts and payments. The idea is to make the process super easy.

Andreas said that partnering up with Stronghold has proven beneficial from the monetary and synergy points of view. Through Newsec, another Stronghold firm, Workaround has gotten leads and built credibility in the market. 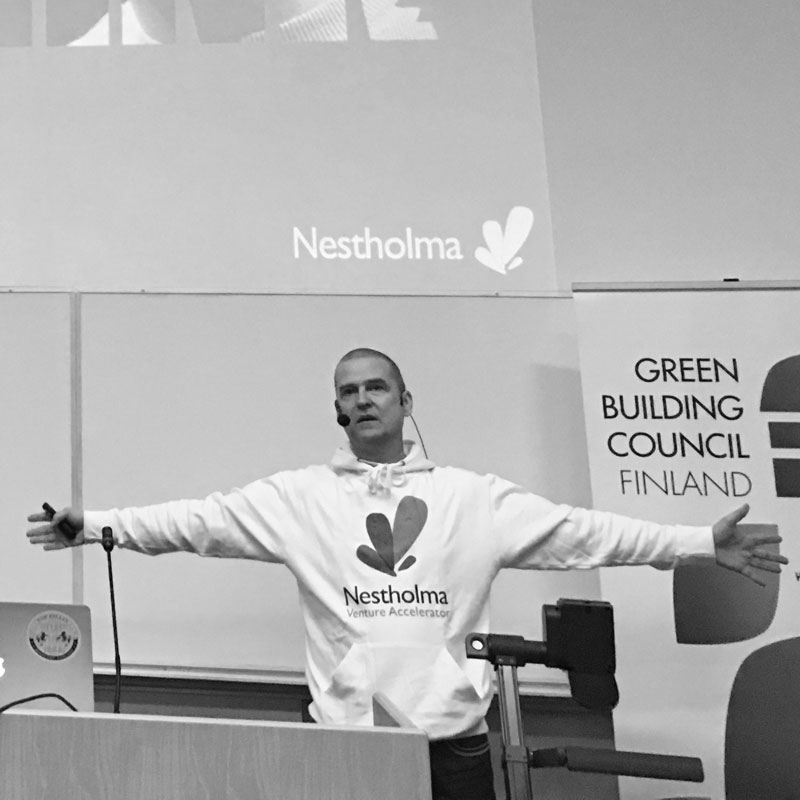 Antti Kosunen, co-founder of the startup accelerator Nestholma, got the audience’s attention by saying everyone there would likely be fired and their businesses would go bust. Then he offered a slight possibility for survival.

Nestholma works with large corporations like Nokia, Microsoft, and Nordea to run accelerator programs. “If you want to work with and learn from startups, you have to work with startups. If you don’t, your competitors will,” Antti said. “Startups are not your subcontractors. If you already know what you’re doing and know exactly what you want, then buy it. If you think that maybe this is where the industry is going…start working with startups. Build an accelerator program. Start doing it with the plan that you’ll be doing it for the next three years.”

Who wants to build the next platform?

The last presenters in the morning session were Professor Seppo Junnila and Research fellow Lauri Pulkka of Aalto University. Seppo argued that big digital players from outside the ReCo industry want to get their share of the biggest market in the world. They want to grow profitably, benefiting from the models they’ve created in other fields. Seppo reminded listeners that the fastest way to succeed is to build a platform. This will win out over all other traditional business strategies in a relatively short time.

Lauri has studied ecosystems and business platforms, especially those presented at Slush. He had struggled, though, to find a list of top 30 startups that are interesting from the ReCo standpoint. Using investor data, Lauri found that of the around 200 built-environment-related startups, 160 were using smart-building technology. Of these, 150 generate and collect data. However, only six companies said their business model is based on using the data.

Lauri shared what he had learned at workshops and from interviews with incumbents. Established companies are very excited about the idea of platforms but are waiting for others to build them. Nobody seems willing to be the founder, operator, or integrator of a platform. Construction industry firms have extensive knowledge of and experience in managing complex networks. Why not use that know-how to create a platform for the digital built environment and smart buildings? 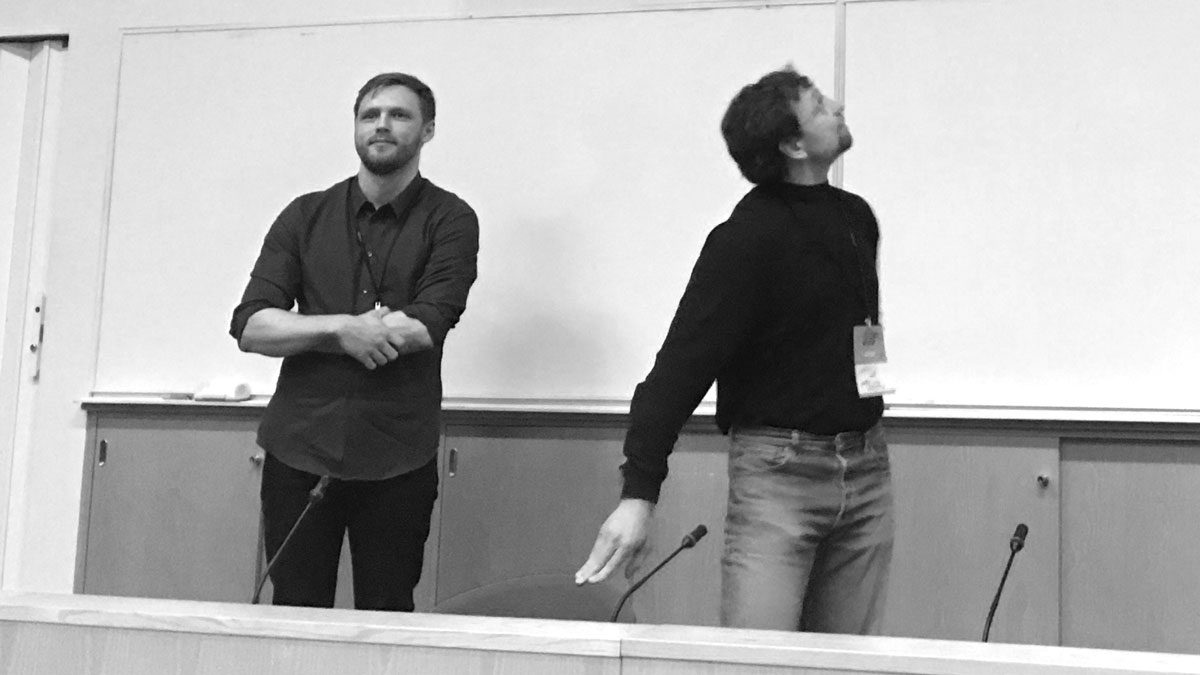 In my next post, I’ll report on the interesting afternoon presentations.