When you come to Helsinki by boat, the most prominent buildings on the skyline are a few churches. In fact, the city of Helsinki has not favored high-rise buildings, until now. Several projects that will reach unprecedented heights are under construction, and I visited one of them, REDI.

Last week, members of Nestor Partners gathered at REDI Living Lab. The lab is a stylish demonstration and meetup venue provided by SRV, the building contractor. Our host was SRV’s Project Director Juhani Katko. He was the head of Real Estate at Nokia back in the 1990s when I was involved in the mobile phone company’s construction projects.

Juhani gave us a thorough presentation of the project. He started off by explaining how future residents of REDI have been involved in the design process: “A large number of people have attended our workshops. We want to know what residents really want from living and services. We’ve also been eager to get feedback on the designs.”

A harbor becomes an area for urban living

REDI is located in Kalasatama, an old harbor and industrial district. Redi is an area where ships used to anchor before unloading, 150 years ago. The area became available for new construction once the harbor functions moved to Vuosaari. REDI is a unique project, the biggest of its kind in Finland. It consists of six residential towers, one office block, one hotel tower, and one of the largest shopping centers in the country. The project will be completed in 2023. The extended Kalasatama district will eventually have around 30,000 inhabitants in the 2030s.

“We see REDI as the pulsating heart of the strongest developing district of the city, an extension of the city center,” Juhani explained. He reminded us that even if this is a very urban area, the sea and the nearby islands offer an escape from the fast pace of modern life.

REDI will be accessible by many forms of transport. The Metro with 500 daily stops and a highway with 100,000 cars passing through will be accessible on the third floor. A major cycle route, Baana, will run through REDI. Underground parking facilities will hold 2,000 cars, and there will be 3,000 parking spots for bicycles.

The project started in 2011, but had a setback the following year when a complaint by an individual citizen halted the process for almost two years. He was concerned about fire safety and the wind conditions at the site. 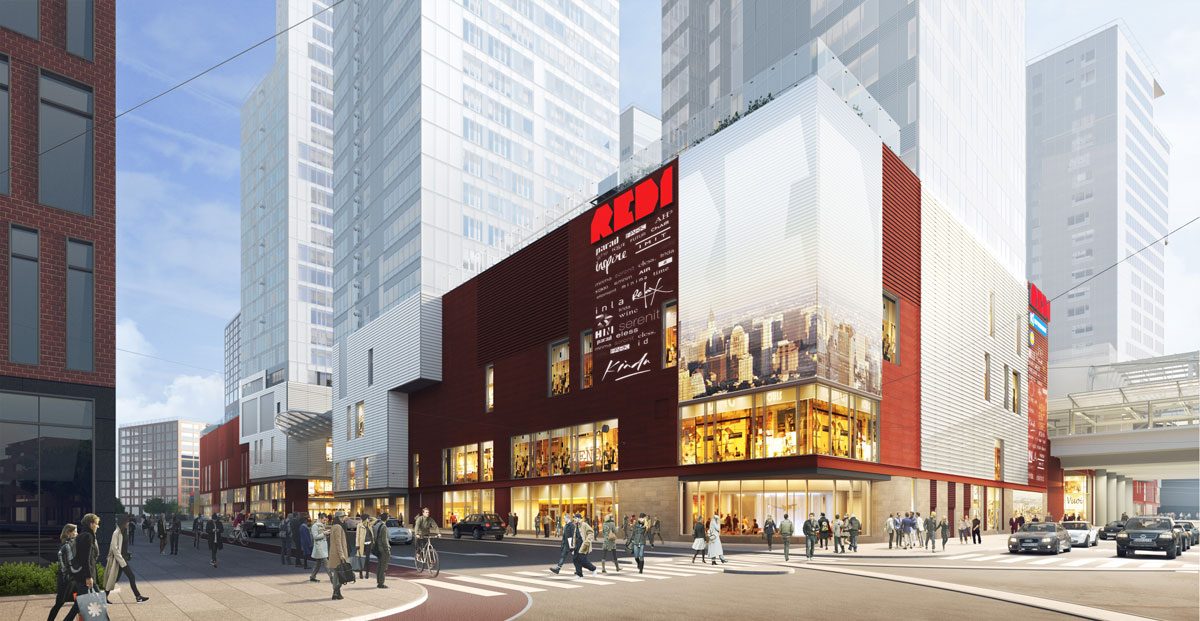 What makes this project stand out?

Helin & Co is the architect of REDI. “I think that the architecture is awesome,” said Juhani. “We’ve tried to draw inspiration from the maritime and industrial history of the area.” When I asked Juhani what’s special about REDI, he mentioned two things. Having so many high-rise residential buildings in one place is exceptional in Finland. The highest towers will reach 132 meters and have 33 floors. The other thing that makes the project stand out is the service concept.

REDI dwellers will be served by lobby personnel. They’ll have online services, saunas, recreational spaces and a laundry. A centralized vacuum waste collection system will serve the homeowners. The shopping mall with 200 shops will offer commercial services. There will also be a health-care center and a school nearby.

We were able to see actual life-size model homes at the Living Lab. They were quite compact, as is the trend in Helsinki, but very functional. Apartments will have floor heating and cooling. The whole of the REDI project is designed to be energy efficient, e.g. the mall is going to be LEED Platinum certified.

Juhani concluded by telling us how the marketing of the apartments of the first tower, The Lighthouse, had commenced. When they opened up the reservation page on the web, 200 of the 283 apartments were reserved during the first few hours.

A hackathon for digital service ideas

Juhani mentioned that there had been a hackathon, #REDIHACK, the week prior to our visit. I wanted to learn more and got a brief from Hanna-Kaisa Vaittinen, Digital Communications Manager at SRV. 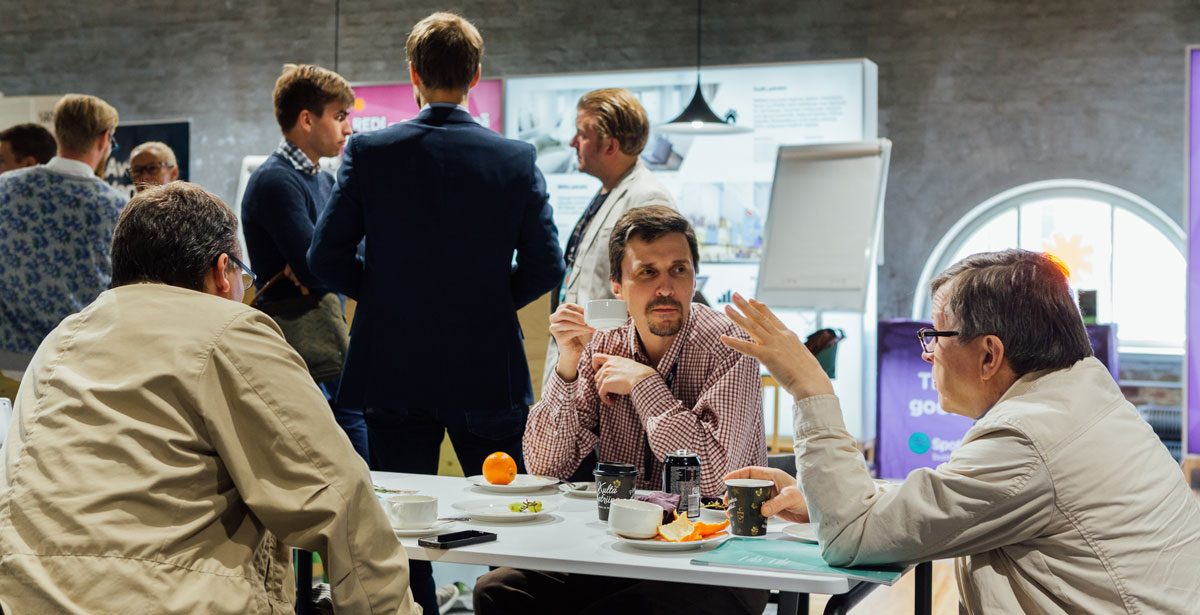 “Companies are struggling to innovate alone and are looking for inspiration from companies in other industries and from startups,” said Hanna-Kaisa. SRV wanted to get fresh ideas for services for REDI. They used the expertise and the Nordic network of Avanto Ventures to organize a hackathon. Other organizing partners were KONE, Microsoft, the K-Group, and Idean. #REDIHACK took place over five days, starting on September 19. 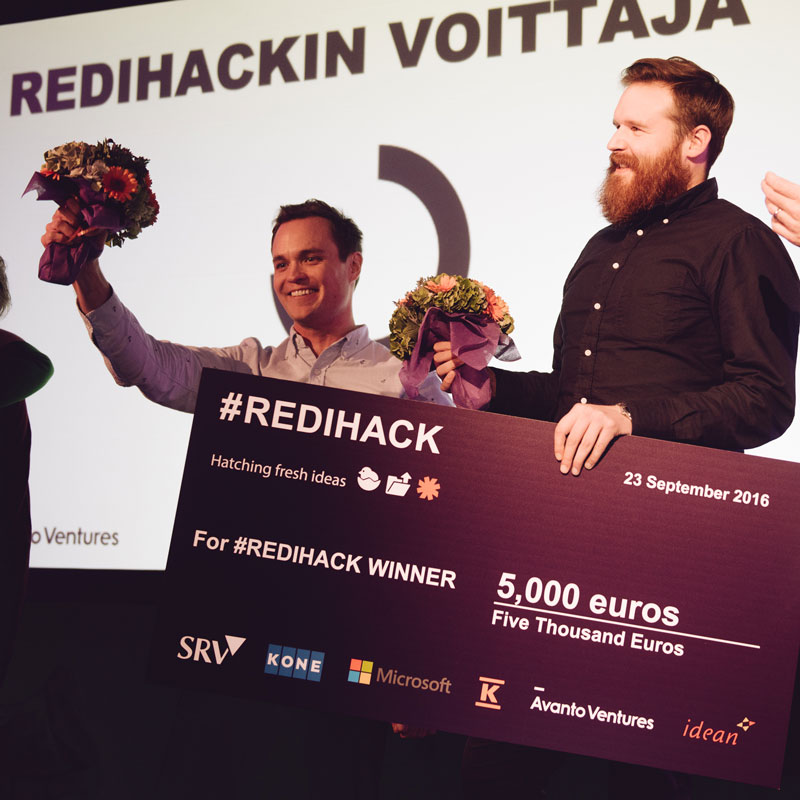 From a long list of thirty, twelve teams were chosen to participate. Finally, eleven hack teams pitched in front of an audience of business professionals, investors, public-sector decision-makers, and the jury. The winner was GetJenny, an intelligent service agent that resides in messaging platforms, such as Facebook Messenger. It allows residents to order services and command IoT systems with a mobile device.

Hanna-Kaisa pondered about how to continue collaboration with innovative startups. She thinks that developing an ecosystem of services and developers might be the way to go forward.

The REDI shopping center will open for business and the first residents will move into the Lighthouse tower in 2018. It will be interesting to see how the service ideas are put into practice in a real-life environment.