Despite that the construction industry is often considered conservative, there is always plenty of room for fresh ideas. Original ideas are the reason businesses can innovate their offerings much more quickly, continue providing better services to the customers, and grow profitably. The challenge is to sell your idea to your peers or to your customers.

Many innovative people fall in love with their ideas. These people feel that only a fool would not understand what a great opportunity it is they are offering. Sure enough, in a perfect world, great ideas would prevail, and savvy business people would “get” them immediately. Unfortunately, there are many roadblocks before even the greatest idea becomes a business reality.

First of all, you’ll have to understand your audience. Depending on the familiarity of the audience and the newness of the idea, there are four basic sales scenarios (see the chart). Each scenario requires a different tactic. 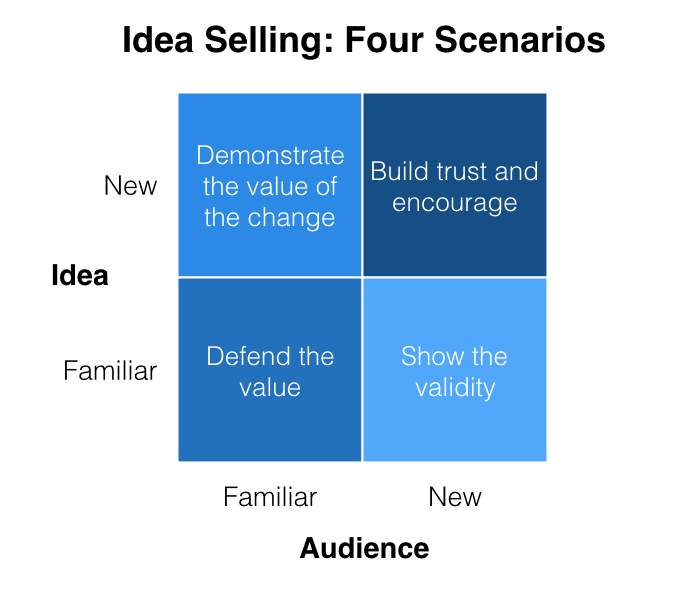 Trust is a decisive element in selling a new idea. I wrote about experimentation in one of my posts. Experimentation within your own organization is a great way to create familiarity. Trusted people who have tested the idea successfully become your advocates. Their approval and endorsement makes selling a lot easier.

Obstacles to selling your idea

One of the main obstacles to selling any new idea is fear. People are afraid that a new way of doing business or of working will be too disruptive and unpredictable. When you’re unsure about the outcome, you hit the break.

An unclear outcome poses a clear risk. Therefore, one of the first things you must understand when selling your ideas is your audience’s fears, even if they are not explicitly expressed. Managers fear losing status, control, or power. Fear of losing money is also extremely strong, especially among the incumbents. The more stable the business, the more reluctant the owners are to jeopardize their seemingly secured profits.

Fear can be a showstopper. Alternatively, it also serves as one of the strongest motivators to handing over money. Many great presenters know this when they begin their story by painting a picture of a threat or hazard. The idea or solution that they sell will be the hero that will save the business.

The three layers of an idea

Your idea has actually three layers. The outermost is the visible layer: what the idea does, what technology it harnesses, what features it has, or what opportunity it seizes. These items are the easiest to explain, and many—unfortunately—think that these are enough.

When you understand the third innermost layer of your idea, you’re far ahead of most of the competition. The third layer is the vision you’re selling. If you know what desires and ambitions drive the audience, you have a much better chance of gaining acceptance than by simply sticking to the facts. When you’re dealing with businesses, it is also advisable to know their histories, visions, and strategies in advance.

Consider your goals before each step

You should also consider your goals before starting the idea-selling process. What are your short-term, midterm, and long-term objectives? Answers to these questions help you focus on the right issues and actions when selling your idea. An idea sales process takes time, and planning every step helps you deliver the right message to the right audience.

For example, if you are selling an idea of a new business model, your first interactions could be about identifying the right audience that corresponds well with the idea. The goal of the second phase could be “commitment” and the third, “action.”

Sam Harrison writes in his book ideaselling how a good idea sales process takes into consideration Aristotele’s Rhetorical Triangle, or the three elements of persuasion:

Sam Harrison concludes: “Selling is all about what’s going on in the hearts and minds of decision makers.”

Many potentially great ideas have been killed because of a poor sales process. Don’t let that happen to your idea!