A few weeks ago, I was a speaker at a seminar on the future of office work. At the venue, I noted a cube-like object with two gentlemen sitting inside. I stepped in, and I was immediately sold on the concept. It was a Smartblock, an idea and product that I’m sure will stick. 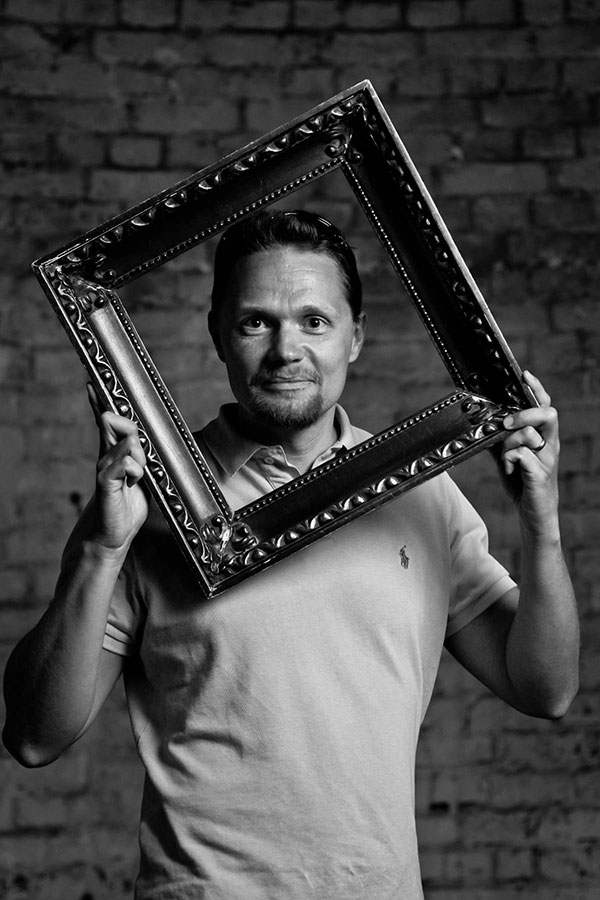 The two gentlemen were Janne Orava and Tatu Sovinen of Smartblock, a Finnish startup. I got so excited about their product that I promised to go back and interview Janne, the CEO. Today, I had the chance to talk with him again.

Can you tell us about your background?

I graduated from the Helsinki School of Economics in 2001, and I majored in e-commerce. I started off as an entrepreneur in 2005. I worked in two one-man consulting firms before starting this company. I co-founded Smartblock with Mikko Sarkkinen in November 2015. We also have an investor aboard.

I joined Mikko’s firm, Ideamoottori, in January 2015 after getting to know him at his company’s pre-Christmas party. At the time, I was a consultant for my company, Re:meet, which helped companies improve their meeting practices. The idea was that I would go to companies and advise them on how to effectively use Smartblocks, Mikko’s new product. In March 2015, when the product was launched, I became a sales agent. However, that did not satisfy me, so I became more involved in the business.

How did Smartblock, the company, start?

At last year’s Slush we had eleven cubes on display. In two days, we got over 200 leads. People were queueing to view the cubes. Based on this tremendous feedback, we decided to spin off Smartblock as a business of its own. We founded the new company with Mikko in November 2015. Mikko is the main owner, and I’m a co-founder.

Back in 2002, Mikko founded a special effects firm, Blast Wave. He became the creative director of Ideamoottori ten years later. The company makes furniture for public spaces and exhibitions. These are one-off projects with very short product lines.

Mikko started to think about what kind of reproducible furniture the company could make that the world needs. After thinking it over with his co-workers, Mikko came up with an idea for a furniture-like workspace cube. At the end of 2014, the almost production-ready prototype was ready for display.

Smartblock is a furniture-like workspace cube. It has wheels, so you can move it around easily. When it’s locked in place, it is a fixed workspace. It’s enclosed on three sides, and it has a ceiling. When you’re inside, it feels like a nest.

The cube is made of a wooden material, MDF, which means that it does not block radio signals. It is cushioned inside, and it has electronics built in. There are speakers in the ceiling, adjustable LED lighting, a display unit, and electric outlets. Mikko’s idea was that it would contain everything you need for work and even relaxation. 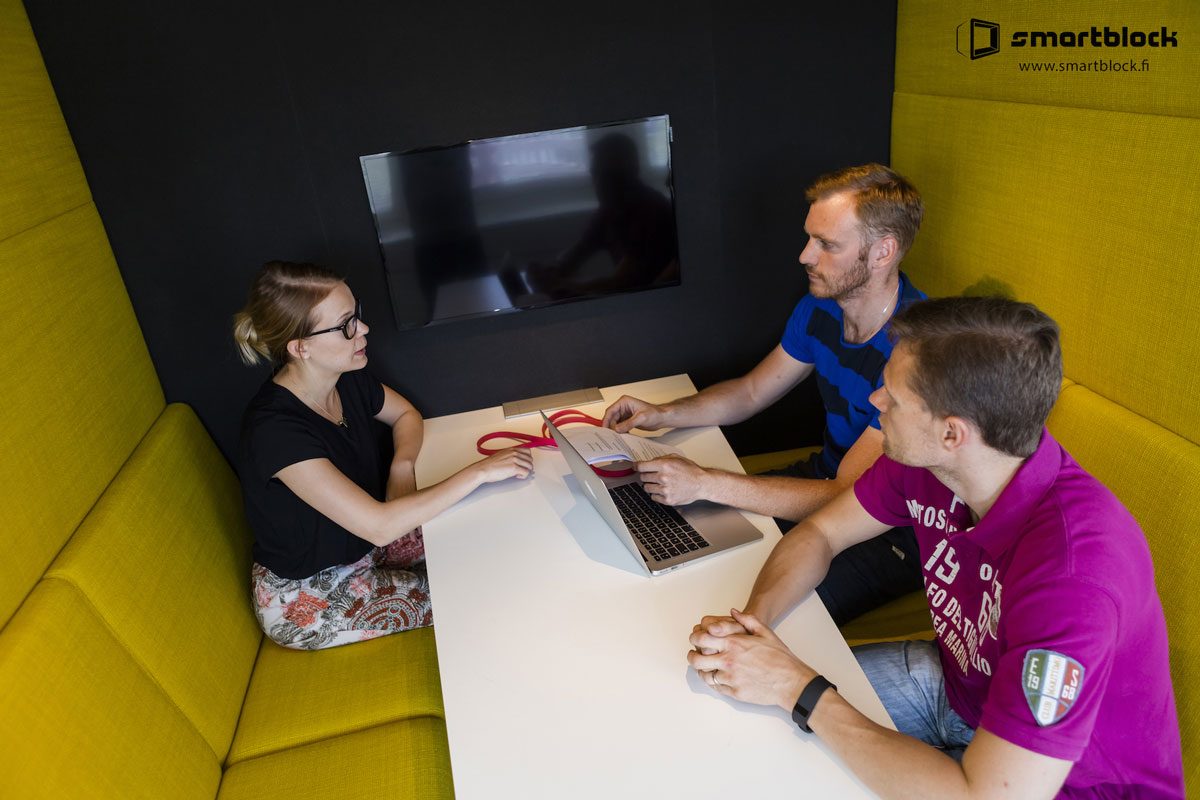 It is easy to buy and use. The customer chooses the model and the upholstery colors. Delivery takes six to eight weeks right now. When the units are delivered, two assemblers bring in the parts and set up the cube in less than four hours. Last week, we set an unofficial world-record when two guys assembled our Full Digital model in 58 minutes flat. Once the block is in place, you just plug its power cable into an outlet and “rock n’ roll”.

A Smartblock is easy to use. Once you’re inside, you’ll immediately understand how it works, so you can for example avoid the hassle of trying to start a presentation.

Smartblocks come in two sizes. The Full model seats four people comfortably, but up to six people can fit if needed. The Half model is for two people. In addition, one person can work outside standing since the table’s height is the right height.

Our products are extremely efficient space-wise. The Full model needs only 3.5 square meters, and the Half model needs 1.75 square meters. Nobody can build a conference room for four people as efficiently as this. Mobility makes the cube very flexible. You can move it on wheels within the same space or dismantle it and rebuild it anywhere. Spare parts are also available, which expands the life cycle of the product.

Office property developers prefer open spaces without drywall barriers. Making alterations to a fixed layout is costly, it takes time, and it’s not environmentally sustainable. Our product is flexible.

What’s unique about your product?

Many people have been amazed to learn that there’s not a similar product already on the market. Sure, there are carpenter-made furniture cubes, but they have no electronics, they don’t have wheels, and they are not made to be assembled and disassembled.

We don’t have patents, but we’ve protected our design in the United States and the EU. We haven’t seen any direct rivals yet. We’re planning on adding intelligent features to the product, which will make us stand out even more. 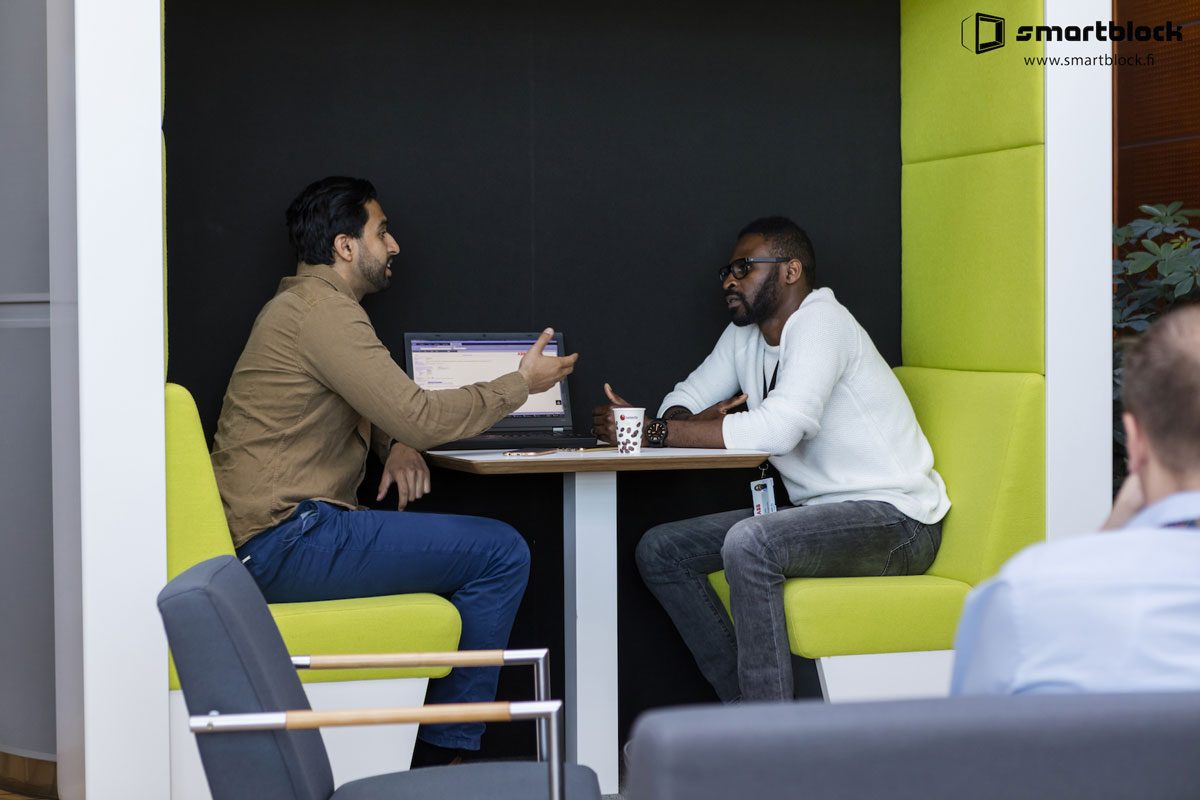 Who has bought your product?

We’ve delivered 50 Smartblocks and sold almost 100 more already. We have delivered Smartblocks to companies, universities, libraries, banks, shopping malls and co-working spaces. Negotiations are in progress with airports, hotels, cafeterias, car dealers etc. We’ve marketed the product on social media, but our main marketing channels are events and exhibitions. Many customers are also happy to demonstrate their Smartblocks expanding our showroom network at the same time.

We made our first installations in the United States in August 2016. First two Smartblocks went to the Bucks County Free Library in Pennsylvania. John Pappas, a branch manager at the library, says most of the patron reactions are “Awesome!”, “I love these!”, and “Can I reserve them every day?”

At noisy exhibitions, people are amazed at the silence in the cube. You can concentrate on your work and sit comfortably. 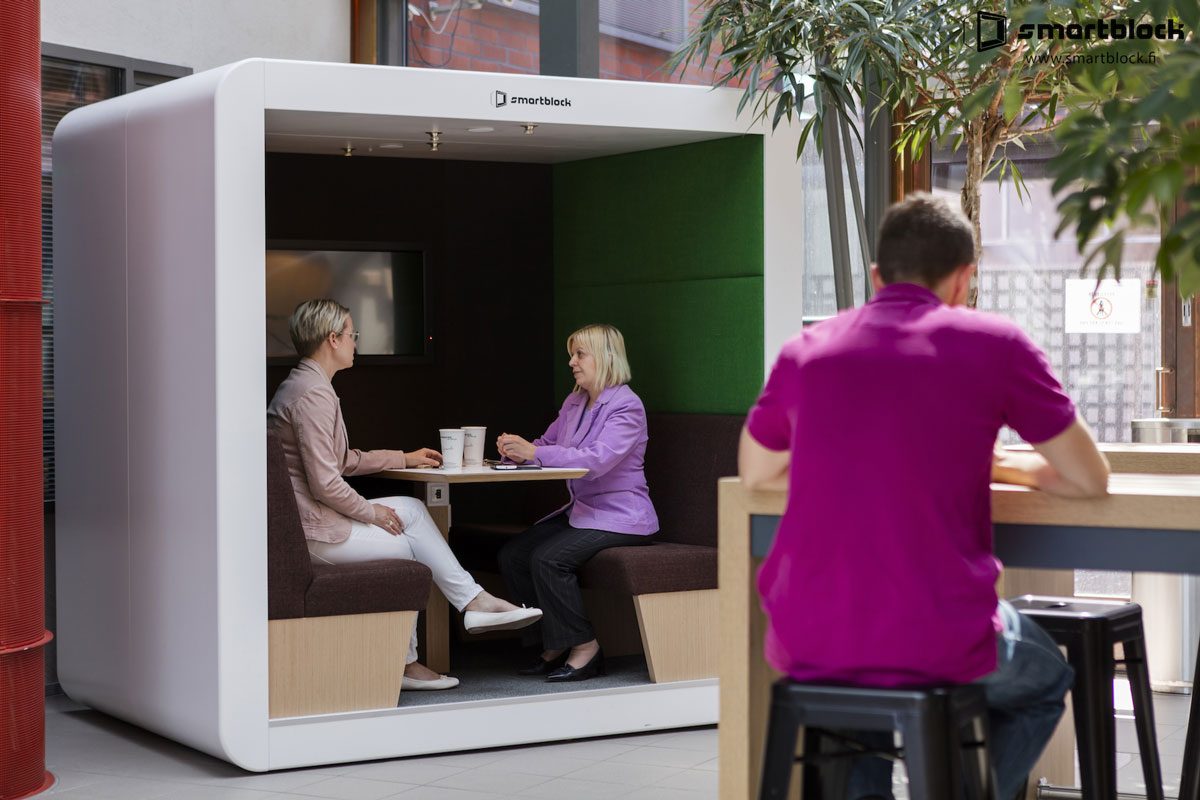 How can our readers learn more?

Our websites are www.smartblockusa.com and www.smartblock.fi (in Finnish). You can contact me directly at +358 40 820 4842 or . We’re looking for sales representatives and resellers especially in the United States. We’re also happy to discuss our Smartblocks with architects and interior designers.

Images are courtesy of Smartblock.