It took a software developer to tell property owners that their thinking is flawed.

Nerd, IoT sensor, Leader, Superhero – these are the terms that Tomi Teikko uses to describe himself in his LinkedIn profile. Admittedly, Tomi does not feel like a typical software developer when he talks enthusiastically about his discovery. “Every real estate app that I’ve encountered is made for the building. None of them focused on the user. This was absurd to person who had spent his career designing for the user,” Tomi cries out. Tomi noticed that the same thinking penetrates the whole industry. “My innovation in this industry is to place the user in the center of design,” Tomi declares. He’s slogan is humans as IoT sensors.

Tomi is the developer of Tieto’s Intelligent Building platform, which people queued to see at Slush. “I registered for ReCoTech last year, but could not go because our demo stand was so popular that I could not leave,” says Tom. Tomi entered the proptech scene one and a half years ago from Tieto’s Digital Channel’s business. At first, he and his colleagues tried to get customers for Tieto’s IoT platform, but soon realized that fleet and property management had the most promising use cases. “I decided that I’ll start developing Tieto’s intelligent building product for non-residential buildings.”

Tieto’s platform collects data from building users and, with that data, measures and optimizes the services of the building. Tomi demonstrates the first version of the app on a big screen. In addition to space-related information, it shows where individuals are. On a floorplan, you see the information that’s relevant to you at any moment. For example, if you want to work in a certain temperature, the app shows that information across the building. Tomi thinks that optimizing HVAC is a symbiosis of people and technology. Instead of trying to create certain indoor conditions in a room with technology, we should show the users the conditions at every workplace and let them choose where they want to work. 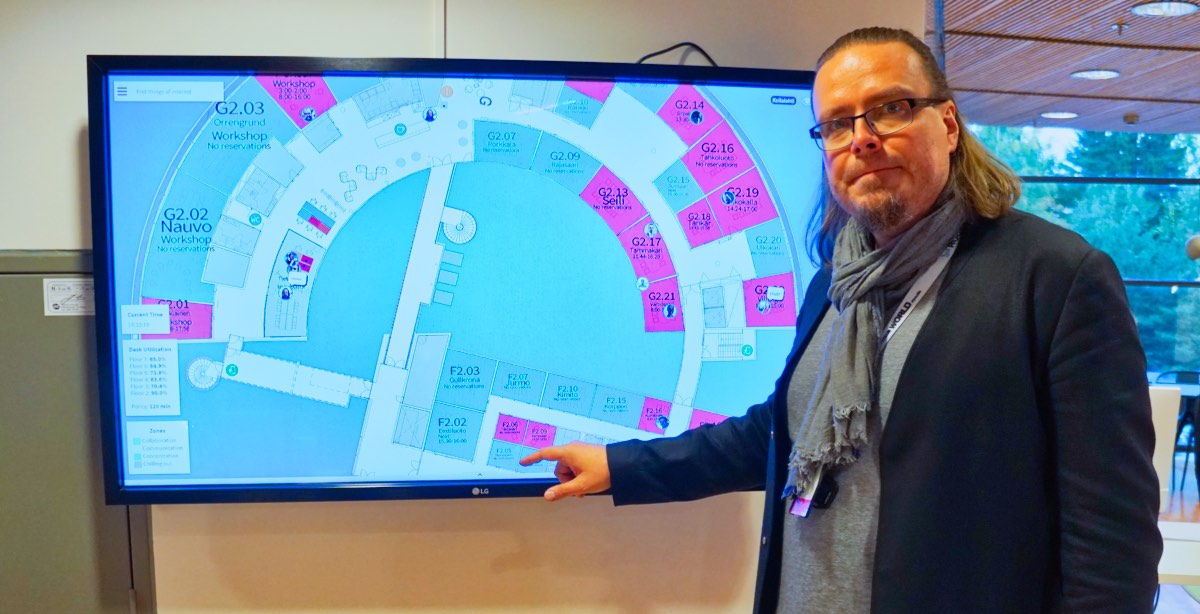 Place the user in the center

Tomi believes that placing the user in the center will have a deep impact on real estate business models. The focus will shift from ownership to providing service throughout the life cycle of a building. Software businesses have moved from waterfall projects to continuous, agile development. The same principles should be prevalent in the real estate industry. “When the physical construction of a building is completed and people move in, you have the first, minimum viable version of the building,” says Tomi. From there on, the process is endless development.

How cleaning is procured and measured is Tomi’s pet peeve. Cleaners’ work often takes place off-hours and it is measured by surface square meters or through inspection. “Why not make cleaning visible and buy it based on user satisfaction? The time spent on cleaning or the number of people doing it then loses its importance.” Tomi wonders. Similarly, reception services could be bought, simply, by specifying that we want a service to which our visitors give the highest satisfaction score.

Today, over ten customers are using Tomi’s platform in activity based office environments. Schools and other facilities will join in next year. The app itself will get new features – for example, fault alerts. The most important new feature is the metering of user happiness. Tomi has developed an app that uses AI to analyze the free-form feedback from the users. It simply asks if the user is happy or not and lets them write comments. “I don’t believe in surveys with fixed questions. They are a form of top-down management where a manager comes up with a question. It only measures the question and does not allow you to talk about something really meaningful,” Tomi says. The AI tool reports the results of four factors of employee happiness; physical spaces, tools, work culture, and the substance of work.

Happier building users are more efficient and productive for the business. Investing in your employees will create better business results. “I strongly believe that time is over when individual needs are not served. If I feel that something is bothering me, it’s a fact. An employer who cares about the employees will fix it one way or another,” Tomi points out.

Tieto has a data incubation program and Tomi’s product is a platform that students and startups can use to develop their own apps. Tieto also has several partners that specialize in different aspects of proptech, like 720 Degrees with their air quality analytics. “It does not make sense for us to start competing in the red sea of technical property management and control. However, I’m happy to share data through my API with other businesses in the ecosystem.” Tomi sees great opportunities in the future in using real-time, personal bio data to control a property. Tomi predicts that the ultimate result is a symbiosis between the user and building.