Digitalization creates new opportunities for citizen engagement in urban planning. I gave a short presentation on the topic at the Digitalization in Urban Planning event in Helsinki.

The event was organized by CHAOS Architects, a tech company. Its AI cloud platform allows citizens to share ideas about their city and co-create it with their community. The platform contains engagement-driven applications and third-party APIs that process business intelligence for better interaction and decision-making.

This article is based on my presentation on October 16, 2018.

“This is a remarkable time,” as one of my podcast interviewees, Paul Doherty, stated. Paul and his company, the Digit Group, develop smart cities all over the world. They demonstrate the power of digitalization and smart technologies in providing convenience and well being to the inhabitants.

Mobile technologies, IoT, AI, and so on are the basis on which we can build solutions that make cities user-friendly. Equally important are the information architectures that allow us to use and exchange data efficiently.

Platforms and applications provide the interfaces for interaction with the built environment and cater to business ecosystems. 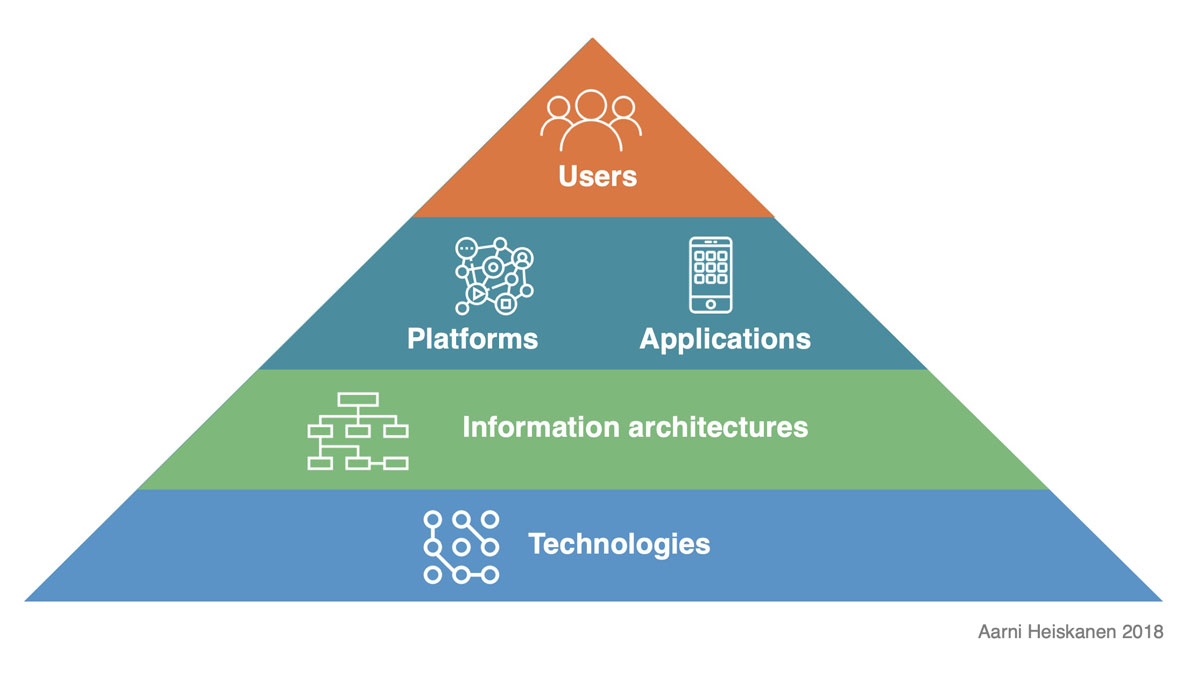 I mapped out some of the engagement tactics on a line based on how open-ended or closed-ended they are.

Closed-ended tactics limit the engagement to predetermined questions. For example, you can vote for certain design alternatives or answer a set of survey or poll questions.

Open-ended tactics, like open innovation and the use of social media platforms, give us more freedom in expressing our views and even to propose completely new solutions.

In addition to deriving from active interaction, engagement can be data derived. Citizens provide data inadvertently whenever they interact with their tech-permeated environment. Their behavior and choices create data that speak volumes about how they really act instead of how they claim to act on a survey or poll. 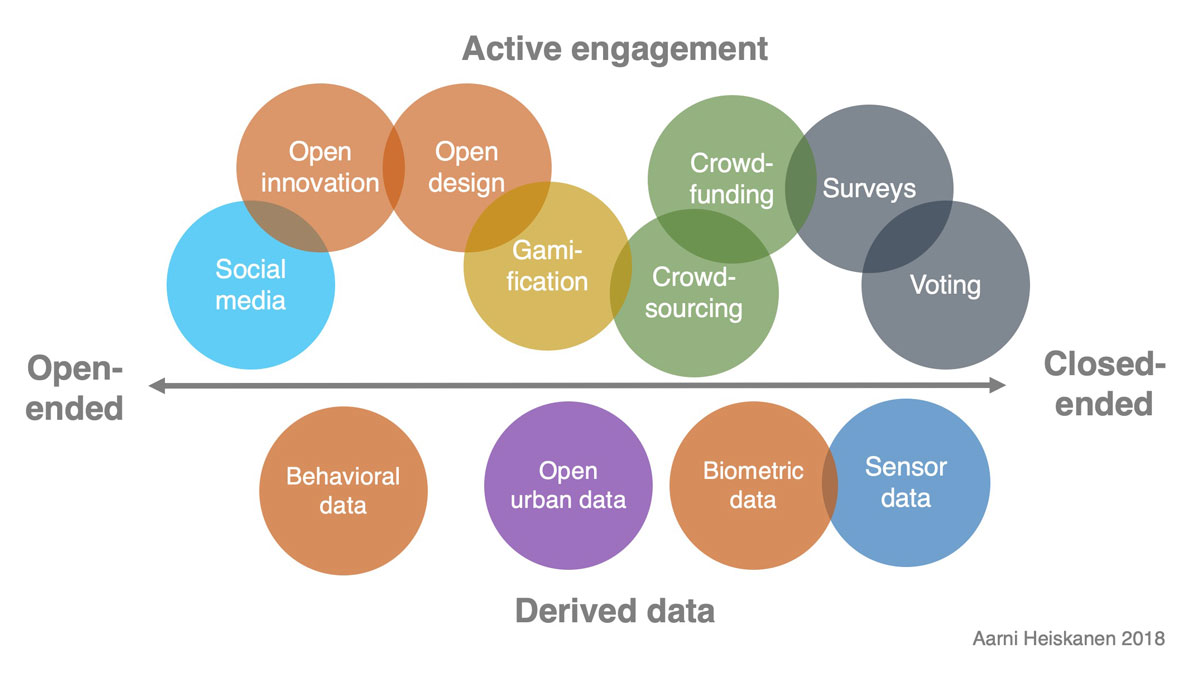 Case Study: The City of Hyvinkää

The Finnish city of Hyvinkää has created a unique Internet service for collaborative 3D city planning. A 3D city model is the platform on which companies, urban planners, and citizens can collaboratively visualize and discuss proposed designs.

Sova3D, a Finnish software company, has developed the intuitive web browser interface. The platform also lowers the threshold of engagement, since you don’t need to install any plug-ins on your computer.

Everyone can see the planned buildings in 3D, comment on the projects in the model, and “like” the comments. The models are connected to a Facebook page where visitors can continue the conversation.

The 3D application also gives planning power to the residents. Using simple tools, they can draw their own ideas for city development. They can add and edit simple building blocks, text, and hyperlinks. There’s even a command to remove existing buildings.

This, of course, is not part of official city planning. However, it reflects the wants and wishes of the residents and could potentially have an effect on future plans.

There’s already lot of data available about the built environment. Many cities in Finland—e.g.,  Helsinki—have opened up their data repositories. Designers can enrich that data with real-time information from IoT sensors, commercial sources, and mobile apps.

I interviewed Uber’s Marius Macku for my blog. Uber is sharing data from their mobility apps, as Macku explained: “Uber Movement is a product which is completely free of charge and provides anonymized data from over two billion trips to help urban planning around the world. With this tool, urban designers, planners, and city managers can make data-based decisions regarding local infrastructure, thus increasing urban livelihood. By understanding travel pattern data, we can design smarter cities with parks instead of parking lots.”

WeWork’s example, although taken from office design, demonstrates the possibilities. When both designers and a neural network predicted conference room usage in an office, the machine beat humans with flying colors.

A coalition of the Toronto, Ontario, and Canadian governments has contracted with Sidewalk Labs to come up with a $50 million design for a new kind of urban community called Quayside, on Toronto’s waterfront. According to a Politico article, Sidewalk Labs describes it as “the world’s first neighborhood built from the internet up.”

Quayside will use technology to enhance human interaction with the environment. Apps and sensors provide data for the city to run itself, without human decisions.

Politico writes, “Constant data collection via smartphones or sensors can make life smoother for civic leaders and residents, in everything from transit to garbage. Apps can help citizens run their own cities in real time.”

The constantly learning city, run by algorithms, is not necessarily an elitist neighborhood. Sidewalks says it’s aiming to reduce the cost of living by 14 percent, making it accessible to the middle class.

Online bots can vote, support, comment, and dislike digitally as well as humans. When 99% of online ad clicks are by bots and 60% of many Twitter accounts’ followers are virtual, can we trust the citizen’s voice to be authentic?

If we engage online, we also give over some of our privacy. Many worry about that as well.

The third big question concerns access. Can everyone who would like to participate have access to the required technology? Do they possess the skills to use the new tools? Will it still be possible to meet face-to-face with leaders and designers?

The Future of Engagement

Digitalization provides city residents with unprecedented powers to take part in planning their own environment. Digital tools enable visualizations and rich data that provide much more information than paper drawings and 2D maps.

The use of artificial intelligence and machine learning helps citizens, experts, and decision-makers understand and predict the impact of design beyond educated guesses.

Trust and transparency are necessary to make engagement meaningful and effective.

How quickly and eagerly cities and decision-makers will eventually take advantage of the new possibilities remains to be seen. As always, technology is advancing faster than administrative processes or politics.