One of the most crucial aspects when transporting goods by lorry is to ensure that the load is adequately secured before leaving. An unsafe load could not only cause damage to vehicles or property, but it could result in serious injuries or even death. The International Road Transport Union (IRU) has recently published new guidelines to clarify the European standards.

The British International Freight Association (BIFA) has raised its concerns that too many operators are still failing to ensure that their cargo is loaded correctly and safely. This doesn’t just have potential issues for the truck driver, but also for other drivers andpedestrians who could be injured or killed as a result of loads coming off lorries.

The majority of accidents happen because loads haven’t been secured in the right way, causing them to move during transport. If a load moves it can be a contributing factor to a truck overturning. This can be dangerous for the driver and those around them. It will also cause delays for others on the road, the news of which can damage the overall image of the haulage industry. If more operators and drivers were aware of the problems and received the correct training these incidents could be substantially reduced.

The problem of unsafe loads isn’t just confined to goods transported on British roads. There can be a great deal of confusion when haulage companies are travelling abroad, as there are a range of different rules and guidelines that need to be followed. These often aren’t taken into account or companies are not even aware of them, meaning that their loads might not comply. Vehicles can be stopped if they’re not loaded or secured correctly, which can delay a consignment. It can be difficult for companies to understand which restraints and practices are acceptable in which countries. 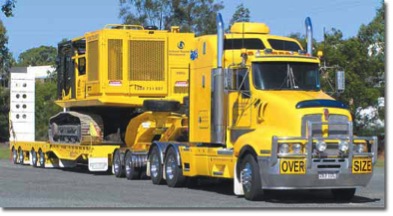 The IRU’s International Commission on Technical Affairs has recently published their own guidelines for haulage businesses and drivers. The International Guidelines on Safe Load Securing for Road Transport are designed with the European Standards in mind. However, they also cover other areas, including specialist sectors such as vehicle and timber transportation. The aim of the guidelines is to highlight the issues of unsafe loads and ensure all operators understand how to safely secure loads. The hope is that this will prevent more accidents from occurring in the first place.

For British drivers, they also need to be up to speed on the Department for Transport’s guidelines. This covers all general aspects of road haulage, as well as specific areas, including the transportation of glass and timber. It’s essential that all drivers understand these guidelines and their role in preventing accidents from happening on the road.

Road haulage is a necessary part of everyday life. However, it can also be one of the most dangerous and is still responsible for far too many accidents. Both the European and UK guidance is a way of making the industry much safer for everyone.