A construction site always looks more like a field experiment than an industrial process. In all fairness, the site of Helsinki’s Central Library site looks well organized and clean. The impressive steel structures suggest that the building will be something special.

I’ve heard the words unique and challenging many times in reference to the new central library. The project epitomizes the old construction-industry saying that “we’re always building a prototype.” Some see that as a curse, some think it’s what makes the industry interesting.

Although the idea of a new city library dates back to 1998, the city of Helsinki didn’t organize an architectural competition for the new building until 2013. The opening of the library was originally set to coincide with the centennial of Finland’s independence in 2017, but the library’s projected opening is now slated for December 2018. The Finnish government is providing €30 million of the €96 million budget.

The competition’s winner, designed by ALA Architects, was an excellent choice. It is an 18,000-square-meter library of the future where people, not books, dominate. The design features a large curvilinear façade made of wood and large undulating wooden ceilings, with an inviting and exciting exterior and interiors. The use of wood to this extent is exceptional for a public building in Helsinki.

Helsinki Central Library from ALA Architects on Vimeo.

Bold use of wood and steel

I’ve often heard that “architects build monuments for themselves.” On the contrary, I think that architecture is a manifestation of the client’s values. In the case of the central library, the city is seeking to create a lasting landmark and a shared living room for the townspeople.

Despite some skeptical comments, the design went on. “I’m sure that the building industry will try to turn it into a concrete building,” Professor Pekka Heikkinen of Aalto University told a leading Finnish newspaper after the winner was announced. Although wooden surfaces dominate, the building houses several structural systems: concrete shafts and slabs, prestressed concrete, and 2,500 tons of steel structures.

As a specialty, 2.5-meter-high steel box beam arches span over 100 meters long through the building. They act like the arches of a bridge, but instead of supporting one slab, they support three floor levels. The original design contained main structures with steel trusses, but these would have bent too much to be useful. 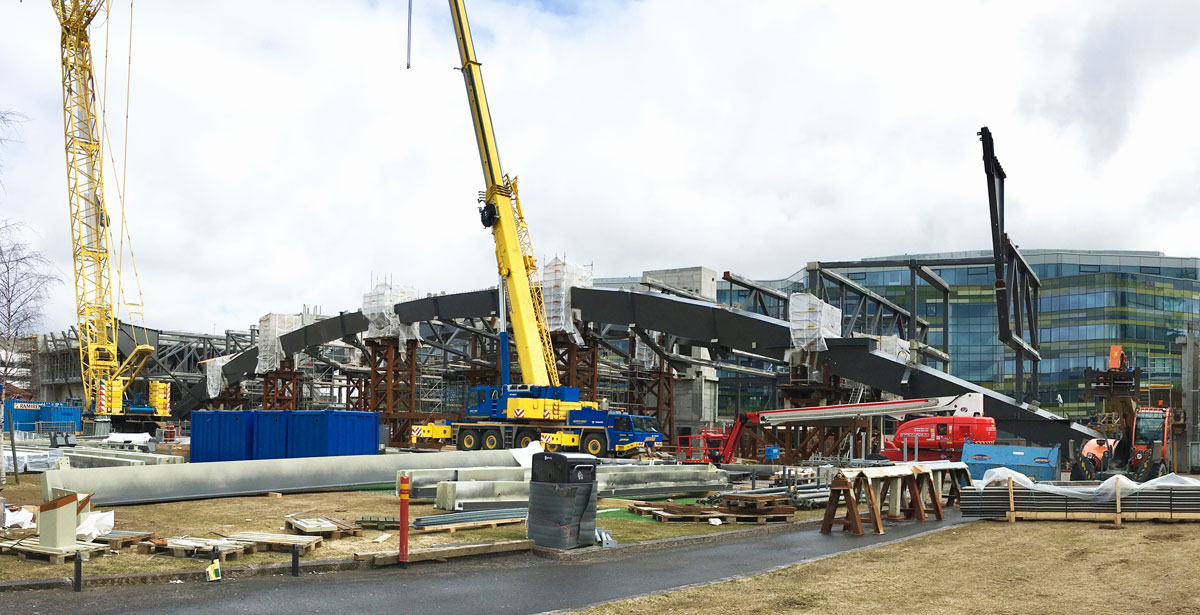 In a video interview for Rakennuslehti magazine, Hannu Martikainen, the leading HVAC designer for Ramboll Finland, talked about the project’s difficulties. “It is an extremely challenging, exceptionally unique, one-time project,” he said. “The architecture is extraordinary and the structural designs are idiosyncratic, so HVAC has to adapt to these solutions. We could not use traditional dimensioning models.”

The HVAC systems themselves are quite standard, something in which the city of Helsinki was not seeking innovation. Still, Martikainen mentioned several alternative heating and cooling systems. The town plan also had a special requirement for the building: It prohibited the placement of ventilation plant rooms on the roof, so the HVAC designers had to use underground spaces and mezzanines for this purpose.

A project can also be quite demanding from a management point of view. YIT, the management contractor for the project, worked with more than 100 subcontractors.

To give you an idea of the project’s many challenges, YIT published a video of the steel arches being installed. The massive steel segments were transported through the city at night in February and March 2017. The heaviest part of the arch weighs 86,000 kg and the smallest 36,000 kg; they were erected on temporary steel supports and then welded together.

Will it stand the test of time?

The question that I often ask when seeing a project like this is, “Will it be useful in the future?” Construction costs are minor compared to the cost of using the building, but a nonfunctioning building is a liability, not an asset. I was once involved in the design of a large research laboratory. The client wanted to tailor the building’s large research hall around specific large research installations. Eventually, the installation will become obsolete and costly alterations will be required.

As for the central library, I think its versatile design will stand the test of time, whatever the future of books and the function of a library. The technical systems in an energy-efficient building are a bigger concern for the future. Will the interplay between ventilation, heating, the building envelope, and users be successful?

Customers and users of the built environment are not interested in buildings per se; they yearn for good experiences. Whether the central library will enchant people remains to be seen. For all the effort it’s required, I certainly hope so.

You can learn more about the construction on the official site of the library.

The title image is a press photo provided by the city of Helsinki.