I visited the newly formed virtual reality startup Teatime Research, tried out their Showroom app demo, and interviewed the team. They let me step into a virtual apartment house, move around, and modify it to my liking. The experience was great!

Sakari Salli, the CEO, recalls, “The first three team members, Paavo, Tommi, and I met in August 2015 at a VR event. We all shared an interest in the possibilities of the virtual reality (VR) technology. We started wondering if we could do something together.”

Tommi mentions that he and Sakari were beginners at that time regarding their interest in VR. Paavo, in contrast, had already been working in the area for a long time and had practical experience. When they got together, the three guys started to think about who else could join their team.

In November 2015, Paavo and Taru Muhonen (Interaction designer), a new addition to the team, were at the the first Finnish AEC Hackathon. In a hack team named Kitchenware, they created the first version of the Showroom app. “We realized that the app had commercial potential, and after certain twists and turns the current team was born,” Sakari explains. “Finally, Noora and Aleksis Karme (CSO) joined in, and in the team was complete in about six months.” 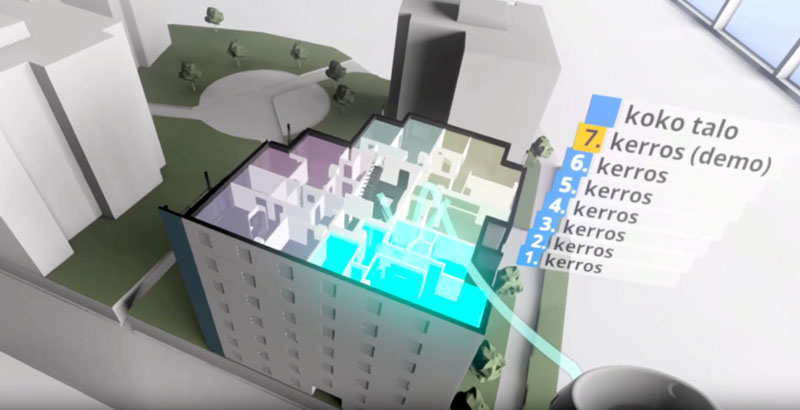 Tommi had been involved in construction, especially in fixed furnishings and housing design. He’s going to graduate as an architect soon. When I asked him what problem that their VR app, Showroom, is solving, Tommi explained that “in short, when a consumer is buying a home that has not been built yet, it is really difficult for her to visualize what the home is really going to feel like. It is hard for a layperson to imagine the space and its dimensions from 2D drawings or perspective renderings. In our application, we can show the space exactly as it is and feels like when you’re in it.”

In Finland, architects use BIM in housing design. The quality and level of detail of the model will define how much additional work is needed when using the model for VR. In the demo case, for example, the model was quite good. Still, the model builder had to trace all the surfaces manually. “The workflow is an essential question. I think that in the near future, when VR gear becomes commonplace, architects will pay attention to how to create the model from the VR point of view and any extra work will be minimized,” Sakari predicts. “Our app creates an easy user experience. Things are in 1-to-1 scale, and so on,” Tommi adds.

According to Sakari, their vision is a virtual environment where customers can not only move in spaces and make choices but also buy things for their home.

What Makes Showroom Stand Out? 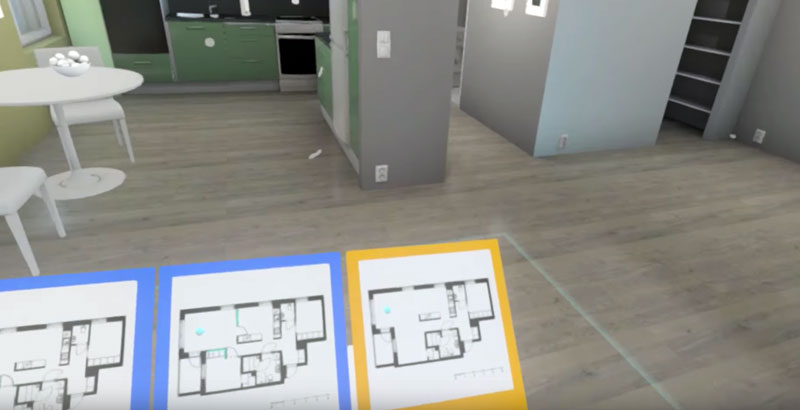 “I would say that what makes our solution special is that nobody has felt sick after using it,” Tommi smiles. “Everyone who has used it has said that it feels nice be there. You can watch YouTube demos of other VR apps that look very promising on your computer screen. However, in reality, the experience with a visor can be less satisfactory. In our app everything works smoothly and the user experience is intuitive.”

“I’d sum up our app’s strengths in one word: immersion. Everything you do in our environment feels so natural that you don’t have to think about the technology behind it,” says Noora.

Teatime Research already has two prospects, two companies that are really interested. In fact, the current demo is based on a real project.

“What we’ve found challenging is the time it takes to identify and contact the right people in large companies. Builders don’t want to just fiddle with a new thing; they want to see the big picture, how it fits in, and if it can be scaled up. We have to proceed one step at a time.”

“There’s one more challenge in selling a VR app. It’s difficult to verbally explain what it is if you have not experienced it. Even though many people are interested in VR and read and hear about it, it is still remains a mystery until you obtain the gear and try it out,” Noora reminds. 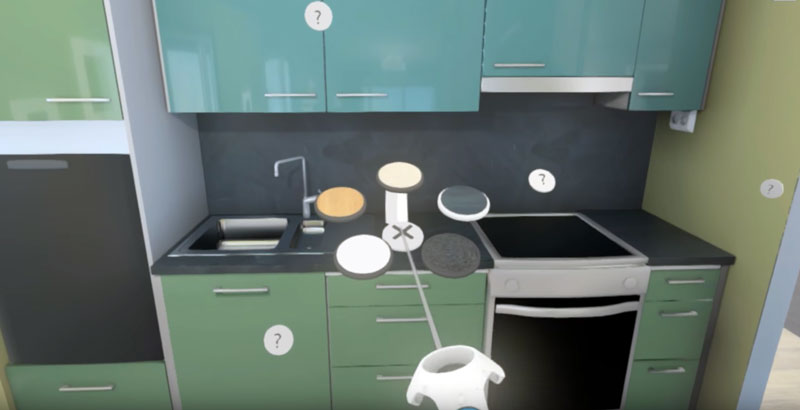 “Visors will become lighter and perhaps we’ll get rid of the cables one day,” Noora predicts. According to Paavo, graphics cards will improve, providing faster and more natural experiences. Eye-movement tracking will make rendering faster because you don’t have to render everything around you at full accuracy.

It may take time before consumers will buy full-blown VR equipment. However, there’s already technology that helps you use VR at home. “After a homebuyer has made her choices at the sales showroom, we can create a 360-degree video of the home and upload it to the buyer’s mobile device. In the comfort of her home, the buyer can share the experience with others.”

“I believe that as VR content creation takes off and consumers are able to get interesting content, they will buy VR gear,” Sakari envisions. “When VR becomes as commonplace as Web browsing, everything will change.”

“We expect to do real business this summer. In addition to home buying, we create apps for other areas. We’re developing a game, located on Jupiter, and a story-based experience. Furthermore, we’re developing a solution for the medical industry and scientific community,” Sakari concludes. “We’re going to take part in the AEC Hackathon in Helsinki, and you’ll see us at SuomiAreena in Pori.”

To know more about Teatime Research, visit their website at teatimereseach.com. Most importantly, visit their office at Iso Paja in Helsinki and try out their awesome VR solution.