There’s now an online game for complementary development of a Finnish suburb. It educates and inspires inhabitants on how to boost the vitality of their neighborhoods. It also provides valuable information to the city, builders, and designers.

Siltamäki is a suburb of Helsinki, the capital of Finland. Built in the 1960s and ’70s, it was designed as a compact community that would encourage interaction between dwellers. Its core, with a shopping center, was dedicated to pedestrians.

With its amenities for outdoor activities, the suburb is loved by its loyal inhabitants. However, they are getting older and fewer. Since 1990, the number of people living in the suburb has diminished from 3,000 to 2,200. The area could house more people, but to attract newcomers, it needs new buildings, repair, and good ideas.

The city of Helsinki, YIT (contractor), and FCG Finnish Consulting Group are now inviting everyone into an online game to collect ideas on how to complement the area with new buildings, extensions, and services. “The Complementary Building Game aims at breaking the impasse between the pressures of urban growth/densification and a reluctant local population (sometimes fairly or unfairly labeled NIMBYs),” the makers of the game say.

The Complementary Building Game is in Finnish and open through April 10, 2017. 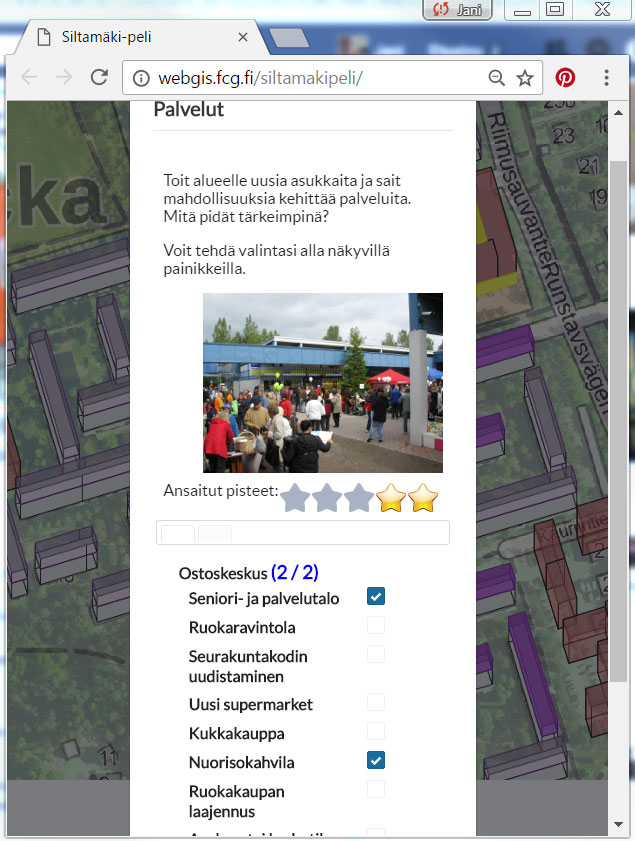 The game has a short intro that summarizes the history and features of Siltamäki. After that, the player sees the game board. It is a bird’s-eye view of the area with stylized building blocks placed over the map of the site.

The player’s task is to make choices on different types of actions. The player can elevate existing condominiums or add whole buildings. A calculator on the left side of the interface shows the impact of the choices: number of new buildings and floors, number of new inhabitants, and the increase in the purchasing power. There’s also a star rating, indicating the “urbanity rate” of the player’s solution.

The objects on the game board are fixed. The player cannot move the building blocks or add proprietary elements. I guess the idea of the game’s authors has been to keep things as simple as possible.

When the player is happy with her building tasks, the game presents a list of services that the player can add, e.g. a skate park or a day care center. Next, the game asks whether the player lives in Siltamäki. If the player placed new floors in her block, she gets to choose how to use the money earned from the extension. Finally, the player sees a score card and can add a short message.

Knowing the potential of online gaming platforms, this is a bare-bones version. However, it can inspire the owners of condominiums to consider how they can revive their environments and retain the value of their assets. It is also educational for anyone just trying it out. The game’s simplicity means it is accessible to most people, not just gaming freaks.

I featured some time ago Infra, a first-person puzzle adventure. The player’s task was to help fix the deteriorating infrastructure of a city. It had rich interaction and stunning graphics. Perhaps the same idea could be used in suburban renovation?

Virtual and augmented reality technologies will be the next big thing in citizen participation. With a smartphone augmented reality app, the inhabitants could see on site how their environments would change. Charles Woodward of VTT mentioned in his interview that they’ve tried this with building committees in Raasepori and Helsinki.

The Siltamäki game is an example of participatory design and ideation. I’m happy that the city is taking steps in this direction, and I look forward to more experiments in the future.